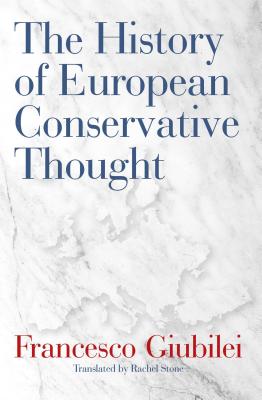 The History of European Conservative Thought

Modern conservatism was born in the crisis of the French Revolution that sought to overturn Christianity, monarchy, tradition, and a trust in experience rather than reason. In the name of reason and progress, the French Revolution led to the guillotine, the dictatorship of Napoleon Bonaparte, and a decade of continental war.

Today Western Civilization is again in crisis, with an ever-widening progressive campaign against religion, tradition, and ordered liberty; Francesco Giubilei's cogent reassessment of some of conservatism's greatest thinkers could not be timelier.

Within these pages, English-speaking readers will come across some familiar names: Burke, Disraeli, Chesterton, and Scruton. Americans get their own chapter too, including penetrating examinations of John Adams, Richard Weaver, Henry Regnery, Robert Nisbet, Russell Kirk, William F. Buckley Jr., and Barry Goldwater. But perhaps most interesting is Giubilei's coverage of the continental European tradition–largely Catholic, monarchical, traditionalist, and anti-Jacobin, anti-Communist, and anti-Fascist.

Giubilei offers insightful intellectual portraits of statesmen and philosophers like Count Klemens von Metternich, the man who restored Europe after the Napoleonic Wars; Eric Voegelin, the German political philosopher who made his career in America and traced recurrent strains of leftism to an early Christian heresy; Joseph de Maistre, the leading French counterrevolutionary philosopher; George Santayana, a Spaniard who became an American philosopher and conservative pragmatist; Jose Ortega y Gasset, who warned of the "revolt of the masses"; and a wide variety of Italian thinkers whose conservatism was forged against a Fascist ideology that presented itself as a force for stability and respect for the past, but that was fundamentally modernist and opposed to conservatism.

Unique and written by one of Italy's youngest and brightest conservative thinkers, Francesco Giubilei's History of European Conservative Thought is sure to enlighten and inform.

Francesco Giubilei is an author, publisher, teacher, and professor based in Italy. He is the president of the leading Italian conservative foundation Fondazione Tatarella, a writer for the newspapers Il Giornale and Il Messaggero, and a professor at the University G. Fortunato of Benevento. Giubilei was recently included in Forbe's list of 100 most influential youths in Italy under 30. He is the author of six books. The History of European Conservative Thought is his first book to be published in English.
Loading...
or
Not Currently Available for Direct Purchase