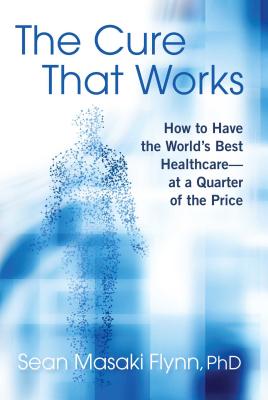 The Cure That Works

What’s the Most Important Fact About the Heathcare Crisis? That We Already Know the Cure!

Whole Foods Markets, the State of Indiana, and innovators around the world have used forgotten American ideas to slash healthcare costs by 75 percent while simultaneously delivering true universal access, coverage for preexisting conditions, and an ironclad safety net.

Praise For The Cure That Works: How to Have the World's Best Healthcare -- at a Quarter of the Price…

"Sean Masaki Flynn is a member of two endangered species: sane Republicans who care about getting good policy and economists who can explain things. His take on the mess that is American healthcare financing is clear, coherent and—I think—largely correct."
— Brad DeLong

"This is a must-read book for anyone who wants to solve the problems with the American health system."
— Deborah Freund

"The Cure that Works presents thoroughly tested and documented reforms that can work here in the United States.  Sean Flynn outlines the missing links that can provide every American with the highest quality healthcare outcomes."
— Vidar Jorgensen

Sean Flynn is an entrepreneur, economist, and educatuator dedicated to bringing affordable, high-quality healthcare to the United States. Born on Clark Air Force base in the Philippines, Flynn's father was a WWII combat veteran and his mother was a Japanese immigrant and student.  When Sean was four years old the family moved to California, whereh is mother won a U.S. Navy scholarship, attended medical school, and became Lieutenant Commander in the Medical Corps of the United States Navy.

Sean Flynn received his bachelor’s degree and a master’s degree in economics at the University of Southern California and went on to receive his doctorate in economics at U.C. Berkeley, studying under Nobel Laureates George Akerlof and Daniel McFadden. He has since taught at Vassar College in New York and Scripps College in Claremont.

Sean is the author of international bestseller Economics for Dummies and a co-author of one of the world’s bestselling economics textbooks.
Loading...
or support indie stores by buying on
(This book is on backorder)