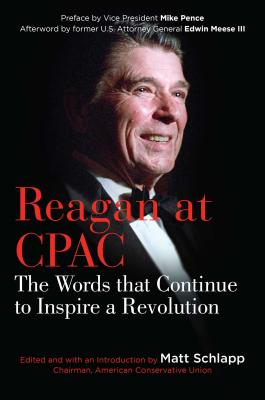 The Words that Continue to Inspire a Revolution

Ronald Reagan's wisdom is more relevant today than ever—and so are the speeches he gave at the Conservative Political Action Conference, collected here in one volume for the first time.

Reagan’s wit, passion, and insight are on full display in these addresses that roused the conservative movement when it was embattled—and that celebrated its successes when Reagan led conservatives to political victory and the White House.

In Reagan at CPAC, the former president's speeches are accompanied by commentaries from an all-star cast of conservative contributors who put Reagan's words in context while showcasing the remarkable relevance of Reagan's insights to the challenges we face today.

Edited and introduced by Matt Schlapp, the chairman of the American Conservative Union, and with an afterword by Reagan’s former Counselor and Attorney General Edwin Meese III, Reagan at CPAC is an invaluable addition to any conservative’s bookshelf.

Matt Schlapp is the chairman of the American Conservative Union, the nation’s original grassroots conservative organization and the host of CPAC, the largest conservative conference in the world. He is also the founding principal of Cove Strategies, a legislative, communications, and political consulting firm. For the first term of President George W. Bush’s administration, Schlapp worked in the White House political affairs office where he served as director through the 2004 reelection campaign. Matt and his wife Mercedes have five young daughters and are parishioners of Saint Mary’s Catholic Church in Old Town Alexandria, Virginia.
Loading...
or
Not Currently Available for Direct Purchase