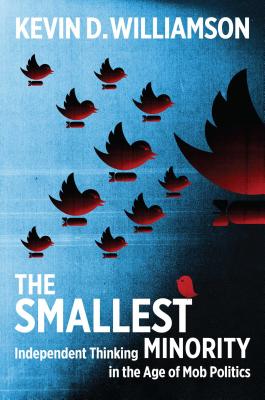 Independent Thinking in the Age of Mob Politics

"The most profane, hilarious, and insightful book I've read in quite a while." — BEN SHAPIRO

"Ideological minorities – including the smallest minority, the individual – can get trampled by the unity stampede (as my friend Kevin Williamson masterfully elucidates in his new book, The Smallest Minority)." — JONAH GOLDBERG

“The Smallest Minority is the perfect antidote to our heedless age of populist politics. It is a book unafraid to tell the people that they’re awful.” — NATIONAL REVIEW

"Williamson is blistering and irreverent, stepping without doubt on more than a few toes—but, then again, that’s kind of the point." — THE NEW CRITERION

"Stylish, unrestrained, and straight from the mind of a pissed-off genius." — THE WASHINGTON FREE BEACON

Reader beware: Kevin D. Williamson—the lively, literary firebrand from National Review who was too hot for The Atlantic to handle—comes to bury democracy, not to praise it. With electrifying honesty and spirit, Williamson takes a flamethrower to mob politics, the “beast with many heads” that haunts social media and what currently passes for real life. It’s destroying our capacity for individualism and dragging us down “the Road to Smurfdom, the place where the deracinated demos of the Twitter age finds itself feeling small and blue.”

The Smallest Minority is by no means a memoir, though Williamson does reflect on that “tawdry little episode” with The Atlantic in which he became all-too-intimately acquainted with mob outrage and the forces of tribalism.

Rather, this book is a dizzying tour through a world you’ll be horrified to recognize as your own. With biting appraisals of social media (“an economy of Willy Lomans,” political hustlers (“that certain kind of man or woman…who will kiss the collective ass of the mob”), journalists (“a contemptible union of neediness and arrogance”) and identity politics (“identity is more accessible than policy, which requires effort”), The Smallest Minority is a defiant, funny, and terrifyingly insightful book about what we human beings have done to ourselves.


Praise For The Smallest Minority: Independent Thinking in the Age of Mob Politics…

"If anyone picks up this book under the mistaken impression that it will flatter him or his political allies, he will be quickly disabused of that notion. In that sense, The Smallest Minority is the perfect antidote to our heedless age of populist politics. It is a book unafraid to tell the people that they’re awful. The Smallest Minority is ostensibly a book about politics in the age of social media, but it is at root a timeless exploration of group dynamics and mass psychology. Williamson provides an intellectual road map to navigate the social-media landscape — a thoughtless morass of pessimism, of vitriol, and of cynicism masquerading as wisdom. And he does so with plenty of wit and off-color commentary. Williamson does not disappoint for those who are attracted to this work to get the inside scoop on his own brush with the censorious mob that ejected him from a brief tenure at The Atlantic over a ginned-up, intellectually dishonest contretemps. The occasionally juicy anecdotes involving the swarm of Millennial cultural revolutionaries who convinced their elders to serve him up in sacrifice to the hivemind are absorbing, but they are relegated to the prologue. And for good reason. They simply reinforce the veracity of the narrative Williamson weaves throughout the book."
— National Review book review

“'Procedural democracy is a convenience,' writes Kevin D. Williamson in his new book, The Smallest Minority: 'It pacifies the chimps in the electorate and gives us an alternative to ritual combat for the chimps in office.' To say that Williamson has little faith in the American political system, however, would be a mischaracterization. His real gripe is with the distortion and inversion that occurs when the ethos of 'majority rule'—which, he argues, should be confined to our governing institutions—instead determines society’s beliefs and morality at large. Witness the sociopolitical climate, current year. To please the masses has always been to wield power, but instead of the panem et circenses of Roman times, the mob now clamors for a new sort of alimentation: outrage. Shallow pretenses of classical liberalism soon give way to outright barbarism and enforced ideological conformity. The end result: 'ochlocracy,' or mob rule, a phenomenon that Williamson teases out in its many social, psychological, and ethical dimensions. Williamson is blistering and irreverent, stepping without doubt on more than a few toes—but, then again, that’s kind of the point."
— The New Criterion book review

The Smallest Minority is "stylish, unrestrained, and straight from the mind of a pissed-off genius. That stylistic choice, on top of all the actual FUs, is part of his overall 'screw off' being delivered to the gatekeeping that he's come up against. And, gates unkept, the result is remarkable and madly readable... So has Williamson written a manifesto? A tell-all? A work of philosophy? No, it's a dare. I dare you to handle it, Williamson is saying. I dare you to ignore the language and style and personality and engage the ideas. I dare you to get over yourself and over all the pointless social rules that constrict discourse today. I dare you to think. When you read a writer who isn't even trying to play the Have Virtuous Opinions and Show Status game, it's a stark reminder of just how much everyone else is playing that particular game. This is the tradeoff for sometimes saying unfortunate stuff about hangings, the tradeoff the Atlantic decided wasn't worth it. Reading this book shows just how worth it it is, though."
— The Washington Free Beacon book review

"The most profane, hilarious, and insightful book I've read in quite a while: Kevin Williamson's new, brutal take on social media mobbing."
— Ben Shapiro, founder of The Daily Wire and host of The Ben Shapiro Show

"... and that's why he can't work here."
— Also Jeffrey Goldberg, editor-in-chief, The Atlantic

"Kevin Williamson can be a total jackass. He has also written some of the sharpest, most insightful work I've read. Some folks are complicated that way."
— Will Saletan, Slate

"Disrespectful, impertinent, snide, insulting, and hurtful—in short, everything I look for in a writer."
— Nick Searcy, actor

KEVIN D. WILLIAMSON has written for the Wall Street Journal, Washington Post, Indian Express, Playboy, The New Criterion, Academic Questions, and Commentary, and for an infamous three days he was a staff writer at The Atlantic. A reporter and columnist for National Review, he has taught at Hillsdale and the King’s College and writes a regular column for the New York Post. His previous books include The Smallest Minority: Independent Thinking in the Age of Mob Politics.
Loading...
or support indie stores by buying on