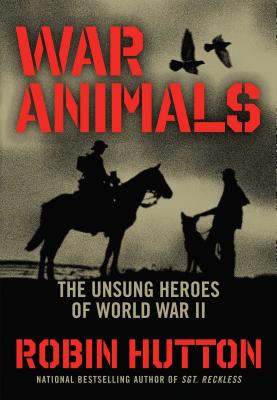 "This book will delight both animal lovers and military buffs!" — Elizabeth Letts, bestselling author of The Eighty Dollar Champion

Millions rallied to the cause of freedom against Nazism and the menace of Imperial Japan. But did you know that some of those heroes had fur, or feathers? War animals guarded American coasts against submarine attack, dug out Londoners trapped in bomb wreckage, and carried vital messages under heavy fire on Pacific islands. They kept up morale, rushed machine gun nests, and even sacrificed themselves picking up live grenades.

Now Robin Hutton, the bestselling author of Sgt. Reckless: America’s War Horse, tells the heart-warming stories of the dogs, horses, mules, pigeons—and even one cat—who did their bit for the war effort. American and British families volunteered beloved family pets and farm dogs to aid in the war effort; Americans, including President Roosevelt, bought honorary commissions in the reserves for lapdogs and other pets not suitable for military duties to “exempt” them from war service and raise money to defeat Hitler and Tojo. Many of these gallant animals are recipients of the prestigious PDSA Dickin Medal, the “Animals’ Victoria Cross.”

-Judy, the POW dog who helped her beloved human survive brutal Japanese prison camps
-Cher Ami, the pigeon who nearly died delivering a message that saved American troops from death by friendly fire
-Beauty, the “digging dog” who sniffed out Londoners buried in the wreckage of the Blitz—along with pets, including one goldfish still in its bowl!
-Olga, the horse who braved shattering glass to do her duty in London bombings
-Smoky, the Yorkshire terrier who did parachute jumps, laid communications wire through a pipe so small only she could navigate it, became the first therapy dog—and starred on a weekly TV show after the War
-Simon, the war cat whose campaign against the “Mao Tse Tung” of the rat world saved food supplies and his ship’s crew
-Chips, who guarded Roosevelt and Churchill during the Casablanca Conference, and the only dog to earn a Silver Star for his heroics

The shining loyalty and courage of these heroes is a testimony to the enduring bond between us and the animals we love.

ROBIN HUTTON has spent her adult life working in major event productions and the motion picture business. She is co-author of The 9 Indispensable Ingredients in Every Hit Film, TV Show, Play and Novel and was the writing and producing partner of Tom Laughlin (the legend of Billy Jack fame) for over thirty years. Hutton is the author of Sgt. Reckless: America’s War Horse and president of Angels Without Wings, Inc., a non-profit corporation that spearheaded the development and dedication of three national monuments to Sgt. Reckless. She was named Patriotic Citizen of the Year by the Military Order of the Purple Heart for her work.
or support indie stores by buying on
Copyright © 2020 American Booksellers Association