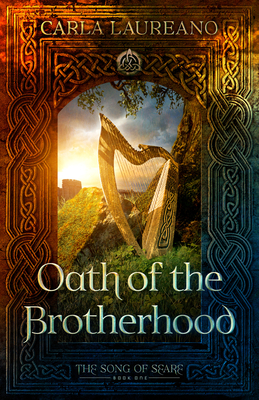 Oath of the Brotherhood (Book One) (Song of Seare)

When evil threatens, who will find the faith to fight it? In an island kingdom where the Old Ways hold fast and a man's worth lies entirely in his skill with the sword, Conor Mac Nir is a musician and a follower of a forbidden faith--problematic for any man, but disastrous for the son of the king. When Conor is sent away to a neighboring kingdom to secure a treaty, he learns that his ability with the harp is a talent that traces back to the magical foundations of a once-united Seare. But his newfound home is soon placed in peril, entangling Conor in a plot that has been unfolding since long before his birth. Only by leaving both kingdoms behind and committing himself to an ancient warrior brotherhood can Conor discover the part he's meant to play in Seare's future. But is he willing to sacrifice everything--including the woman he loves--to follow the path his God has laid before him?

Carla Laureano is the two-time RITA award-winning author of contemporary inspirational romance and Celtic fantasy. A graduate of Pepperdine University, she worked as a sales and marketing executive for nearly a decade before leaving corporate life behind to write fiction full-time. She currently lives in Denver with her husband and two sons, where she writes during the day and cooks things at night.
Loading...
or
Not Currently Available for Direct Purchase