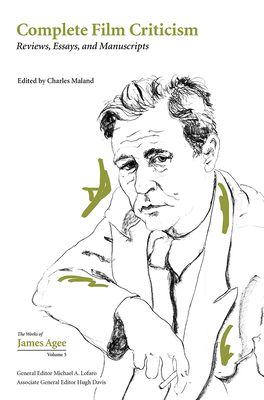 “James Agee changed American film criticism. This book shows why. We have for the first time all of Agee’s reflections, published and unpublished, on the art he loved most. Agee’s penetrating mind, patient eye, and lyrical prose show that film criticism can go beyond simply praising or disparaging the latest release. Agee’s reviews display a moral and emotional engagement with the power of movies, and Charles Maland has given Agee his full due with a revealing historical introduction and diligent research. Complete Film Criticism demonstrates the full range of Agee’s critical powers and is a must for any film-lover’s library.”
—David Bordwell, Jacques Ledoux Professor of Film Studies, Emeritus


“Agee's film reviews are insightful, entertaining, and, in their quiet way, genuinely poetic. Although best known for Let Us Now Praise Famous Men and his Pulitzer-prize winning novel, he's equally brilliant as a film critic. Agee realized early on that even a Hollywood film could be, in the hands of the right director, a work of art, and it was a natural step for him to move from writing about film to becoming a first-rate, honored screenwriter.”
—Gerald Peary, Professor of Communications and Journalism, Suffolk University

CHARLES MALAND is the J. Douglas Bruce Professor of English at the University of Tennessee. His books include Chaplin and American Culture: The Evolution of a Star Image and American Visions: The Films of Chaplin, Ford, Capra, and Welles.