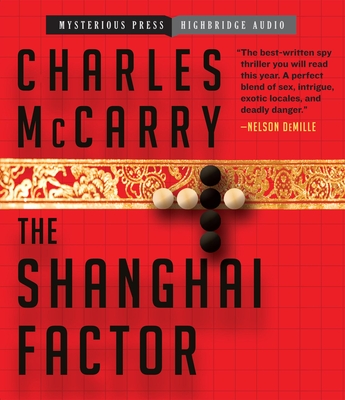 An unnamed spy is dispatched to Shanghai to aid a shadowy U.S. agency known only as HQ. There he meets a mysterious woman named Mei and begins a torrid affair that threatens to expose him to Chinese intelligence, the notorious Guoanbu. As danger waits for him around every corner, and the enigmatic Mei moves into and out of his life, he finds himself drawn further into a deadly cat-and-mouse game between Guoanbu and HQ that threatens not only to end his life but to also dangerously destabilize East/West relations.


Praise For The Shanghai Factor…

“Stephen Bowlby adopts the perfect tone in this audio edition. . . . [His] characters are distinct and he differentiates between each of them subtly, never going over the top into caricature. Fans of McCarry will be as pleased, both with this latest outing and with Bowlby’s smooth, professional reading.”
—Publishers Weekly

“Bowlby’s low-key performance mirrors McCarry’s carefully imagined, mundane world, but one permeated with an undercurrent of danger, source unknown, a fact that heightens the sense of menace. . . . . Bowlby portrays the large cast of Chinese characters . . . in authentic-sounding accents. A strong sense of place effectively adds to the impact of this cerebral, interior thriller.”
—Booklist

“This is an intricately plotted tale of believable espionage that, read by Stephen Bowlby, becomes an intriguing audio.”
—BookPage

STEPHEN BOWLBY earned his BA in Speech & Theater at Westminster College in Pennsylvania, a short trip from his native North Jersey. His career quickly moved from commercial radio into television and film production as a writer, editor, and director with voice work ever present. With more than 35 years’ experience he’s expanded into audiobook performance, studying with such industry greats as Pat Fraley, Scott Brick, and Stefan Rudnicki.

CHARLES MCCARRY served under deep cover as a CIA operations officer in Europe, Asia, and Africa. He is the author of several previous critically acclaimed novels, as well as numerous works of non-fiction.