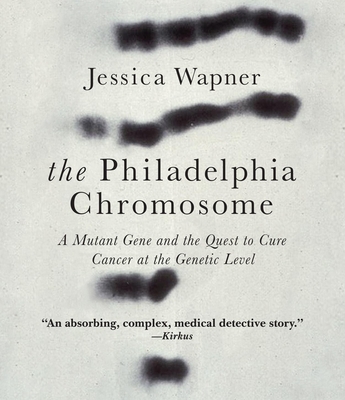 Almost daily, headlines announce newly discovered links between cancers and their genetic causes. Science journalist Jessica Wapner vividly relates the backstory behind those headlines, reconstructing the crucial breakthroughs, explaining the science behind them, and giving due to the dozens of researchers, doctors, and patients whose curiosity and determination restored the promise of a future to the more than 50,000 people diagnosed each year with chronic myeloid leukemia (CML). It is an astonishing tale that will provide victims of other cancers and their loved ones realistic hope that cures may yet be found in their lifetimes.

The Philadelphia Chromosome charts the milestones that led to present-day cancer treatment and tells the inspiring story of the dedicated men and women who, working individually and in concert, have sought to plum the mysteries of the human genome in order to conquer those deadly and most feared diseases called cancer.


Praise For The Philadelphia Chromosome: A Mutant Gene and the Quest to Cure Cancer at the Genetic Level…

“[Wapner’s] gracefully written history skillfully combines both the science and humanity of this fascinating search for a cure for chronic myeloid leukemia.”
—Publishers Weekly

“A refreshingly balanced view of the topic. . . . An excellent book for those who want to learn more about how medical discoveries are made and those interested in recent medical history.”
—Library Journal

HEATHER HENDERSON has brought her authentic, resonant voice and a full cast of characters (from a Scots nanny to a Fargo housewife) to hundreds of projects during her 20-year career. She earned her doctorate at the Yale School of Drama, and her credits include production dramaturgy on the world premiere of August Wilson’s Fences. She has published arts features and reviews in newspapers across the U.S. and has won awards for poetry and screenwriting. What seems to impress people most, though, is that she was an extra in Animal House.

Jessica Wapner is a freelance science writer focused mainly on health care and medicine. Her work has appeared in publications including Scientific American, Slate, The New York Times, theatlantic.com, New York, Science, Nature Medicine, the Ecologist, the Scientist, and Psychology Today. Her writing on cancer research and treatment has also appeared in the patient-focused magazines CR and Cure, and she has been a frequent contributor to the industry publication Oncology Business Review. She lives with her family in Beacon, New York.
Loading...
or
Not Currently Available for Direct Purchase