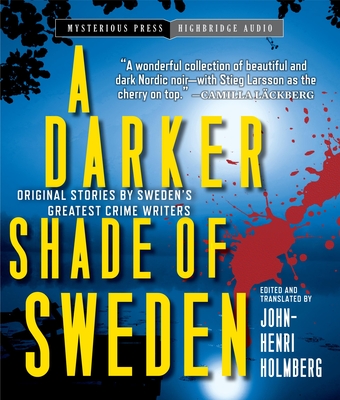 Ever since Stieg Larsson shone a light on the brilliance of Swedish crime writing with his acclaimed and bestselling Millennium trilogy, readers around the world have sought out and devoured the crime fiction of his countrymen (and women), many of whom have proved to be some of the greatest masters of the genre. In this landmark and unique publication, Sweden’s most distinguished and best-loved crime writers have contributed stories to an anthology that promises to thrill even the most jaded mystery reader.

Containing seventeen stories, all never before published in English, A Darker Shade of Sweden illuminates the shadow side of this beguiling country as never before, and promises to be among the most highly anticipated crime fiction of the season.


Praise For A Darker Shade of Sweden…

JOHN-HENRI HOLMBERG is the Edgar-nominated co-author of the 2011 book Secrets of the Tattooed Girl, about the Millennium novels and their author, Stieg Larsson, who was a personal friend. After taking a degree in literature and philosophy at the universities in Uppsala and Stockholm, he has worked as a writer, translator, anthologist, and magazine and book editor and as a publisher. He has written books on science fiction, psychological thrillers, adult fantasy fiction and movies, and lectured on popular fiction, particularly crime and science fiction. For more than fifteen years he reviewed crime fiction for southern Sweden's largest daily newspaper, which gained him the Jan Broberg Excellence in Criticism award as well as election to the Swedish Crime Fiction Academy. He is now a full-time writer, translator, and editor, living with his family on the southern coast of Sweden.

CAROL MONDA is a two-time Audie® Award-winning narrator, with over 15 years of experience. She is also a veteran actress and voiceover artist for stage, radio, television, and film.

Actor, screenwriter and audiobook narrator, SCOTT BRICK definitely gives new meaning to a hyphenate career with credits in film, television, stage and radio. He studied both acting and writing at UCLA, spent ten years with a traveling Shakespearean company, and then went on to become a freelance writer. In 2000, Brick ventured into narrating audiobooks and quickly found himself embraced by the audio world. He’s won numerous Earphones Awards for his narrating skills, as well as Audie Awards. AudioFile Magazine named Brick “one of the fastest-rising stars in the audiobook galaxy,” and proclaimed him a Golden Voice.

In addition to audiobook narration, ADAM GRUPPER's credits include appearances on Law and Order and The Sopranos and the film Music and Lyrics.

EDOARDO BALLERINI Edoardo Ballerini is best known for his on-screen work in The Sopranos, Boardwalk Empire and the indie hit Dinner Rush. He is also a frequent recorder of audiobooks. He lives in New York.