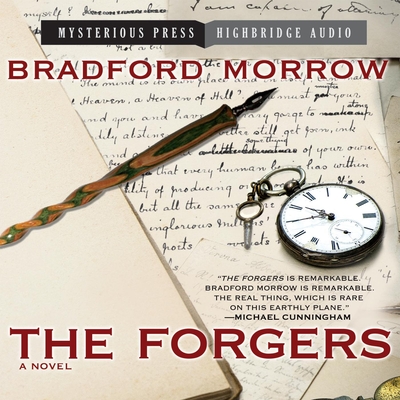 From critically acclaimed novelist Bradford Morrow, called “a mesmerizing storyteller who casts an irresistible spell” by Joyce Carol Oates and “one of America’s major literary voices” by Publishers Weekly, comes The Forgers, a richly told thriller about the dark side of the rare book world.

The rare book world is stunned when a reclusive collector, Adam Diehl, is found dead on the floor of his Montauk home, hands severed, surrounded by valuable inscribed books and original manuscripts that have been vandalized beyond repair. Adam’s sister, Meghan, and her lover, Will—a convicted but unrepentant literary forger—struggle to come to terms with the seemingly incomprehensible murder. But when Will begins receiving threatening letters written in the handwriting of long-dead authors from someone who knows secrets about Adam’s death and Will’s past, he understands his own life is also on the line.

The Forgers delves deeply into the passions that drive collectors to the razor’s edge of morality, brilliantly confronting the hubris and mortal danger of attempting to rewrite history with a fraudulent pen.

BRADFORD MORROW is the author of several novels, collections of poetry, and a children’s book. He is the founding editor of Conjunctions and has contributed to many anthologies and journals. A Bard Center Fellow and professor of literature at Bard College, he lives in New York City.

R. C. BRAY has performed Off-Broadway in New York City, at the Edinburgh Fringe Festival in Scotland, and many stages in between. In addition to audiobooks, his work is heard in promos for The Biography Channel, A&E and CNBC. He lives in New England.
Loading...
or
Not Currently Available for Direct Purchase