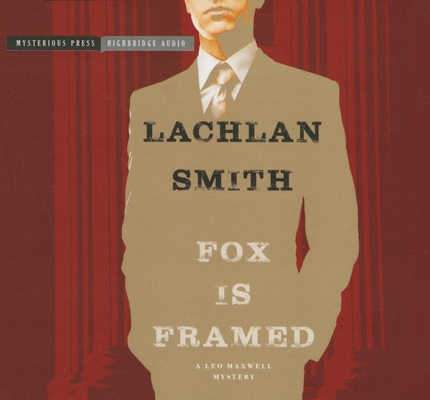 In the thrilling third novel in the series, Oakland attorney Leo Maxwell returns to the dark place where the Maxwell family saga began.

Lachlan Smith won great critical acclaim for his first novel in the Leo Maxwell series, Bear Is Broken, a Shamus Award finalist and Kirkus Reviews the best book of the year that William Bernhardt called “one of the best debuts I’ve read in years.” The second Lew Maxwell mystery, Lion Plays Rough, continued the story, and now, in the utterly suspenseful Fox Is Framed, Smith confronts anew the drama that has haunted Leo-and his recently Brain-damaged elder brother, Teddy-since childhood.

Faced with evidence of stunning prosecutorial misconduct, a San Francisco judge has ordered a new trial for the Maxwell brothers’ father, Lawrence, who was convicted of killing their mother twenty-one years before. A prison snitch soon turns up dead, with Lawrence the only suspect, and Leo teams up with hotspot attorney Nina Schuyler to defend Lawrence against murder charges both old and new. Working on the streets while Nina handles the action in the courtroom, Leo is forced to confront the darkness at the center of his life as he follows a trial of corruption and danger the leads to the very steps of City Hall.

“Lachlan Smith has done the impossible-written a riveting debut novel that stands with the best  legal thrillers on my bookshelf.” –Linda Fairstein, bestselling author of Night Watch, on Bear Is Broken

“Smith has created a wonderfully readable pair of brothers in Teddy and Leo Maxwell.  . . .Lion Plays Rough is as good as Bear Is Broken, which is high praise indeed.” –Huntington New, on Lion Plays Rough

LACHLAN SMITH was a Richard Scowcroft Fellow in the Stegner Program at Stanford and received an MFA from Cornell. His fiction has appeared in the Best New American Voices series. In addition to writing novels, he is an attorney practicing in the area of civil rights and employment law. He lives in Alabama.

R. C. BRAY has performed Off-Broadway in New York City, at the Edinburgh Fringe Festival in Scotland, and many stages in between. In addition to audiobooks, his work is heard in promos for The Biography Channel, A&E and CNBC. He lives in New England.
Loading...
or
Not Currently Available for Direct Purchase