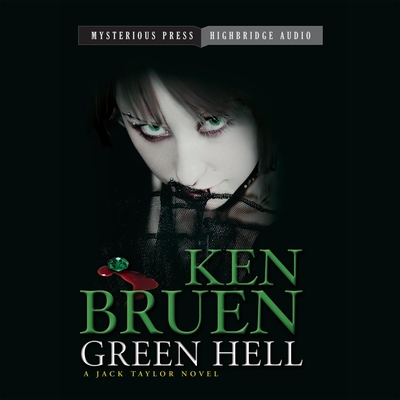 The award-winning crime writer Ken Bruen is a as joyously unapologetic in his writing as he is wickedly poetic. In the new Jack Taylor novel Green Hell, Bruen’s dark angle of a protagonist has hit rock bottom: one of his best friends is dead, the other has stopped speaking to him; he has given up battling his addiction to alcohol and pills; and his firing from the Irish national police, the Garda, is ancient history. But Jack isn't about to embark on a self-improvement plan. Instead, he has taken up a vigilante case against a respected professor of literature at the University of Galway who has a violent habit his friends in high places are only too happy to ignore. And when Jack rescues preppy American student  on a Rhodes Scholarship for a couple of kid thugs, he also unexpectedly gains a new sidekick, who abandons his thesis on Beckett to write a biography of Galway’s most magnetic rogue.
Between pub crawls and violent outbursts, Jack’s vengeful plot against the professor soon spirals toward chaos. Enter Emerald, an edgy young Goth who could either be the answer to Jack’s problems, or the last ripped stitch in his undoing. Ireland may be known as a “green Eden,” but in Jack Taylor’s world, the national color has a decidedly lethal sheen.

“The series that defines Irish noir.” –BookPage, on Purgatory

“The things Jack witnesses these days. . . would cause a saint to go blind. And Jack, whose heroism is fueled by ‘plain old-fashioned rage, bile, and bitterness,’ is no saint. Never was, never will be. Amen.”      -New York Times Book Review, on

Purgatory
KEN BRUEN received a doctorate in metaphysics; taught English in Africa; and then became a crime novelist. The author of then previous Jack Taylor novels and the critically acclaimed White Trilogy, he is the recipient of two Barry Awards and two Shamus Awards, and has twice been a finalist for the Edgar Award. He lives in Galway, Ireland.

KEN BRUEN received a PhD in metaphysics; taught English in Africa, Japan, Southeast Asia, and South America; andthen became a crime novelist. His novels have been nominated for many awards, including two Edgars.

JOHN LEE has acted in shows ranging from Beckett to Shaw and has narrated hundreds of audiobooks including the works of Nobel Winner Orhan Pahmuk and James Joyce’s Ulysses. He is an Audie® Award winner, an AudioFile Golden Voice, and recipient of dozens of Earphone Awards.
Loading...
or
Not Currently Available for Direct Purchase