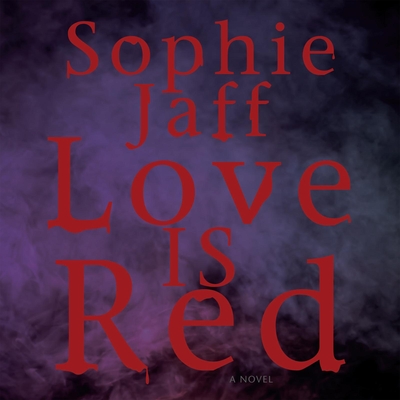 LOVE IS RED is the first book in a stunning new trilogy.

Panic has seized New York City. Someone is brutally murdering women, a killer the media dubs the “Sickle Man” thanks to the way he disfigures his victims. People think he’s the next son of Sam, but because the Sickle Man's viscerally seductive voice forms one strand of Love Is Red, we know how he thinks and how he feels…and that the city has never seen anything like him. Taking more than just his victims lives, the Sickle Man kills to harvest the precious hues one carries within her, which only he can see. Each death brings him closer to capturing the one color, and the one woman, that he must possess at any cost.

While the hunt for the Sickle Man escalates, Katherine Emerson is preoccupied with finding The One.  Could he be the handsome and personable David, or the alluring yet aloof Sael? But how well does she really know these men? And why is she suddenly haunted by increasingly disturbing visions? Katherine may not be aware of the power she possesses, but her moment of awakening is here.

What begins as an exhilarating novel of suspense, of the hunter and the hunted, unfolds into a blazingly intense epic of obsession and control, desire and fate. As Sophie Jaff’s hypnotic narrative twists and turns, we learn we are not at the mercy of a madman, but of great, much more dangerous forces than we could possibly imagine.

J. PAUL BOEHMER appeared in Sir Peter Halls’ acclaimed Broadway production of Oscar Wilde’s An Ideal Husband and in numerous Off-Broadway and regional productions. His film and television appearances include The Thomas Crown Affair, Star Trek: Enterprise, Voyager and Deep Space Nine, Frasier, Judging Amy, Guiding Light and All My Children. He is an award-winning audiobook narrator.
Loading...
or
Not Currently Available for Direct Purchase