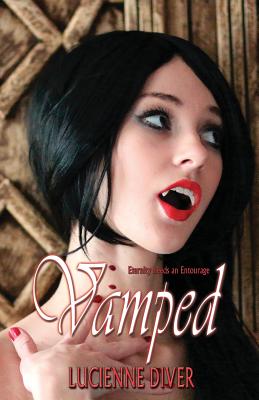 Gina Covello's "Rules for Surviving Your Senior Prom" (spring issue of Modern Goth Magazine):
Rule #1: Do not get so loaded at the after prom party that you accidentally-on-purpose end up in the broom closet with the surprise hottie of the evening, say the class chess champ who's somewhere lost his Coke-bottle lenses and undergone an extreme makeover, especially if that makeover has anything to do with becoming one of the undead.

Gina Covello has a problem. Waking up a dead is just the beginning. There's very little she can't put up with for the sake of eternal youth and beauty. Blood-sucking and pointy stick phobias seem a small price to pay. But she draws the line when local vampire vixen Mellisande gets designs on her hot new boyfriend with his prophesied powers and hatches a plot to turn all of Gina's fellow students into an undead army to be used to overthrow the vampire council.

Hey, if anyone's going to create an undead entourage, it should be Gina Now she must unselfishly save her classmates from fashion disasters and her own fanged fate.