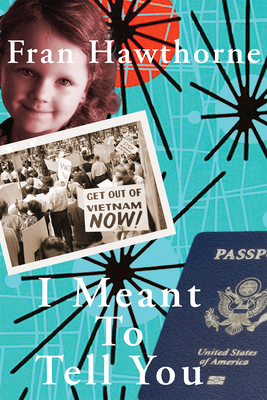 I Meant to Tell You

When Miranda Isaacs’s fiancé, Russ Steinmann, is being vetted for his dream job in the U.S. attorney’s office, the couple joke about whether Miranda’s parents’ history as antiwar activists in the Sixties might jeopardize Russ’s security clearance. But as it turns out, the real threat emerges after Russ’s future employer discovers that Miranda was arrested for felony kidnapping seven years earlier – an arrest she’d never bothered to tell Russ about.

Miranda tries to explain that she was only helping her best friend, Ronit, in the midst of a nasty divorce and custody battle, take her daughter to visit her parents in Israel. Russ doesn’t see it quite as innocently. In a frantic search to persuade Russ that she’s not a criminal, Miranda either makes the situation worse or exposes other secrets and mysteries. Miranda’s stepfather – who has just revealed to her mother that he’s been having an affair—starts dropping cryptic hints about her biological father. On top of all that, Miranda is arrested again, this time for drunk driving.

With everything she thought she knew upended, Miranda must face the truth about her mother, herself, and her future marriage.

Praise For I Meant to Tell You…

“Fran Hawthorne delivers a nuanced exploration of the connections among women – and how they can unravel when lies of omission are revealed. Told through the eyes of three women in different eras, I Meant to Tell You kept me turning the pages late into the night.”
--Jennifer Coburn, USA Today best-selling author of Cradles of the Reich


“Fran Hawthorne has written a wise, kind, and above all compassionate novel about the secrets we keep and the judgments we make.  Her insights into the human heart and mind are both original and illuminating; this is a big-hearted book that is sure to warm yours.”
--Yona Zeldis McDonough, Fiction Editor of Lilith magazine


“I Meant to Tell You opens with a white lie, a small dishonesty. But it widens to reveal that the people we think we know may all be hiding behind convenient mistruths. In that way it is a compelling portrait of our times, stuffed with richly drawn characters and alive with sharp and glimmering prose. A literary page-turner about how our pasts always catch up with us.”
--Brian Castleberry, author of Nine Shiny Objects (long-listed for the PEN/Faulkner Award for Fiction)


“An absorbing, beautifully told story about how tenaciously we hang onto family myths --and how, once one secret is revealed, other truths come into the light.”
--Janice Steinberg, author of The Tin Horse (winner, San Diego Book Award)

FRAN HAWTHORNE spent three-plus decades writing award-winning nonfiction, including eight books, before returning to her childhood love: writing fiction. I MEANT TO TELL YOU is her second published novel.