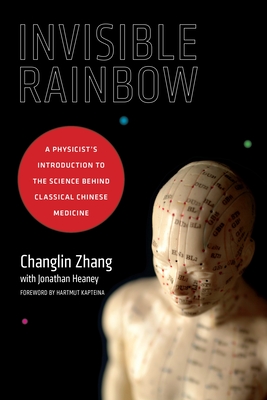 A Physicist's Introduction to the Science behind Classical Chinese Medicine

Changlin Zhang provides a scientific basis for the success behind alternative therapies such as acupuncture, qigong, Ayurveda, and other traditional therapies in an illuminating discussion that explains the efficacy of these approaches in treating a number of chronic conditions. Underlining how public perception of acupuncture has shifted over the last few decades from one of skepticism to one of acceptance, he explores the progression of acupuncture research from its unsuccessful beginnings to the ultimate discovery of a scientific basis for therapies centered on the subtle coherence patterns of interacting electromagnetic waves and fields. He explains the dissipative structure of electromagnetic waves that constitutes our electromagnetic body and describes how changes in our mood, lifestyle, and environment affect it.

Invisible Rainbow explains these developments within the context of science's parallel development from its nineteenth-century focus on materialism, reductionism, and closed systems to its realization of the mass-energy equivalence, electromagnetic field, and its study of open complex systems. Discussing differences in Eastern and Western thought traditions and how they influence their respective medical systems, it also elucidates acupuncture's meridian system and Ayurveda's chakras and auras.

Changlin Zhang, a Chinese-trained physicist who studies the electromagnetic field in human bodies and in other living systems, has more than thirty years experience in medical research in China and Germany. He has published numerous papers in physics, biology, and medical journals in China, Germany, the UK, the U.S., and Switzerland, and he is the editor-in-chief of the International Journal of Physiotherapy and Life Physics. In addition to consulting with private industry medical research firms, he has been a professor of biophysics at Zhejiang University, China, and visiting professor at Siegern University, Germany.

Jonathan Heaney has taught physics in independent and international schools in Australia and China since 2007. He holds a bachelor's degree with honors in mechanical engineering, a bachelor's of commerce degree, and a graduate diploma in education from the University of Western Australia. Prior to teaching, Heaney worked as an engineer and business analyst. He has practiced Taoist qigong for twelve years.

Praise For Invisible Rainbow: A Physicist's Introduction to the Science behind Classical Chinese Medicine…

"Zhang presents proof from the field of natural science and succeeds in demonstrating that the whole material world does not exist in disjunction, but is wrapped together, expressed through an ocean of electromagnetic waves that together determine the functional courses of all living beings."
—Dr. Gerd Schnack, professor of sports medicine and president of the German Assocation of Preventive Medicine

"No other nonmedical book is as attractive to me as this one. Before reading it, I could not have imagined that a book about physics could influence a Chinese medicine practitioner like me so strongly, yet once I began it was impossible to put this book away until I had finished."
—Dan Jiang, MMedSci, registered acupuncturist and doctor of TCM in the UK, visiting senior lecturer at Middlesex University, and visiting professor at Beijing University of Chinese Medicine

"In Invisible Rainbow, Changlin Zhang not only opens the gates to a scientific understanding of Classical Chinese Medicine, but he also opens doors to break out of the prison of naturalistic paradigms of our Western world, paradigms that reduce man to human capital, human material, and biochemical machine. Medically, the human material has to be kept functioning as long as possible to secure maximum medical and economic profit. As a biophysicist, Zhang opens our eyes to all the invisible, and our ears to all the inaudible reality that surrounds us, which we like to exclude from our views in order to keep our world as easy to control and grasp as we like it."
—Hans-Joachim Hahn, founder and organizer of Professorenforum, an organization of German professors

"Many people will enjoy reading this book and benefit from it in various aspects."
—Ruixiang Chen, professor at Beijing University of Chinese Medicine

"The author, Professor Changlin Zhang, describes the acu-points and acu-meridians through a physics lens, with vivid language, proficient knowledge, and profound insight into modern physics."
—Guozhen Chen, professor of physics, Dongwu Unviersity, Taiwan
or support indie stores by buying on
(This book is on backorder)
Copyright © 2020 American Booksellers Association