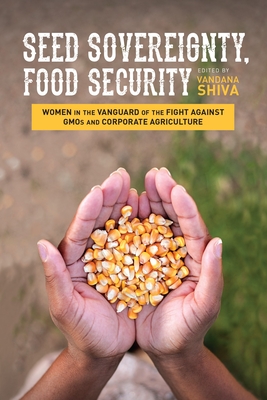 In this unique anthology, women from around the world write about the movement to change the current, industrial paradigm of how we grow our food. As seed keepers and food producers, as scientists, activists, and scholars, they are dedicated to renewing a food system that is better aligned with ecological processes as well as human health and global social justice. Seed Sovereignty, Food Security is an argument for just that--a reclaiming of traditional methods of agricultural practice in order to secure a healthy, nourishing future for all of us. Whether tackling the thorny question of GMO safety or criticizing the impact of big agribusiness on traditional communities, these women are in the vanguard of defending the right of people everywhere to practice local, biodiverse, and organic farming as an alternative to industrial agriculture.

Vandana Shiva is a physicist, world-renowned environmental thinker and activist, and a tireless crusader for economic, food, and gender justice. She is the author and editor of many influential books, including Making Peace with the Earth, Earth Democracy, Soil Not Oil, Staying Alive, Stolen Harvest, Water Wars, and Globalization's New Wars. Dr. Shiva is the recipient of more than twenty international awards, among them the Right Livelihood Award (1993); the John Lennon-Yoko Ono Grant for Peace (2008); The Sydney Peace Prize (2010); and the Calgary Peace Prize (Canada, 2011). In addition, she is a board member of the World Future Council and one of the leaders and board members of the International Forum on Globalization (whose other members include Jerry Mander, Edward Goldsmith, Ralph Nader, and Jeremy Rifkin). She travels frequently to speak at conferences around the world.
or support indie stores by buying on
Copyright © 2020 American Booksellers Association