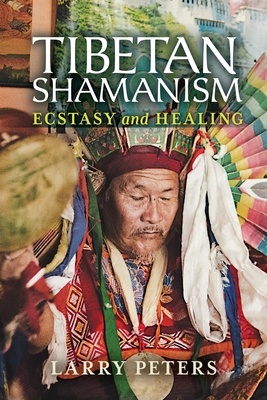 Reflecting sixteen years of intensive fieldwork, this book is a rich chronicle of the daily lives, belief systems, and healing rituals of four highly revered Tibetan shamans forced into exile by the Chinese invasion during the 1950s. Larry Peters lived and studied closely with the shamans in Nepal, learning their belief system, observing and participating in their rituals, and introducing many dozens of students to their worldview. Including photographs of the shamans in ecstatic ritual and trance, this book—one of the most extensive ethnographic works ever done on Tibetan shamanism—captures the end of Tibetan shamanism while opening a window onto the culture and traditions that survived centuries of attack in Tibet, only to die out in Nepal.

The violent treatment of shamans by the Buddhist lama has a long history in Tibet and neighboring Mongolia. At one point, shamans were burned at the stake. However, in the mountainous Himalayan terrain, especially in the difficult to reach areas geographically distant from the Buddhist monastic urban centers, shamans were respected and their work revered. Peters’s authoritative and meticulous research into the belief systems of these last surviving representatives of the shamanic traditions of the remote Himalayas preserves, in vivid detail, the techniques of ecstasy, described as pathways to the shamanic spiritual world.

Dr. Larry Peters is a world-renowned scholar and initiated shaman in the Tamang-Nepal tradition. He was recipient of the Regent's Fellowship at the University of California Los Angeles, and an NICCHD post-doctoral fellow at UCLA's Neuropsychiatric Institute. Dr. Peters holds advanced degrees in both anthropology and psychology. He has conducted ethnographic fieldwork in Nepal, China, Mongolia, and Siberia and is a Nepal Research Associate of the Foundation for Shamanic Studies. Dr. Peters has published extensively on shamanism; conducted workshops on Tibetan Shamanism in the United States, Europe, and Asia; and for more than sixteen years led experiential initiation journeys to Nepal.

“A very interesting and important book by a major authority on contemporary Tibetan shamanism and on shamanism in general. He makes a contribution not just to shamanic studies, but to the preservation of the threatened spiritual heritage of the Tibetans themselves.”
— Michael Harner, PhD, author of The Way of the Shaman and Cave and Cosmos: Shamanic Encounters with Another Reality

“Larry Peters has devoted his life to studying Nepalese shamanism as both an anthropologist and as a practitioner, and so writes with a rare combination of deep personal experience and professional expertise.”
—Roger Walsh MD, PhD, University of California, author of The World of Shamanism

“Larry Peters has spent decades researching the healing practices in Tibetan shamanism. Tibetan Shamanism: Ecstasy and Healing is an ethnography of shamanic healing and the transmutation of soul in a Buddhist culture that ostensibly does not recognize the concept of soul.”
—Sandra Ingerman, MA, author of Soul Retrieval: Mending the Fragmented Self and Walking in Light

“Larry Peters has an intimate knowledge of ecstatic healing methods among Tibetans and Nepalese, and his book shows how close he is to the shamans, and that he has an understanding of their reality made possible by extended field stays.  I met many of the people Peters writes about during my stay in Nepal in 1970/’71 and meeting them again in Tibetan Shamanism is a most welcome experience.”
—Per-Arne Berglie, PhD, professor emeritus, History of Religions, Stockholm University

“I’ve known Dr. Larry Peters’s deep work on the shamanic healing practices of the Tibetan peoples for two decades. Professor Peters’s experiential knowledge of this healing tradition makes this book a must read for anyone interested in Tibetan shamanism or shamanism in general.”
—Bhola Banstola, Nepalese Shaman, president and founder of Nepal Shaman
or
Not Currently Available for Direct Purchase
Copyright © 2020 American Booksellers Association