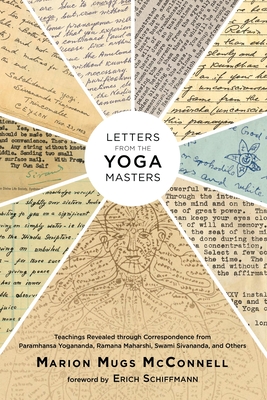 Letters from the Yoga Masters (Paperback)

Teachings Revealed through Correspondence from Paramhansa Yogananda, Ramana Maharshi, Swami Sivananda, and Others

This intimate and insightful account of the life of Dr. Harry (Hari) Dickman, referred to by Swami Sivananda as “the yogi of the West,” features more than fifty years of correspondence between Dickman and well-known yoga masters such as Swami Sivananda, Ramana Maharshi, Paramhansa Yogananda, and almost one hundred others. Marion (Mugs) McConnell, Dickman’s student, has created a brilliant and loving tribute to her teacher, who founded the Latvian Yoga Society in the early 1930s and later spread his knowledge in the U.S. with the blessings of Paramhansa Yogananda, author of Autobiography of a Yogi. Offering a broad range of information on yoga history, theory, and techniques from a variety of different paths, Letters from the Yoga Masters contains a treasure trove of previously unavailable material and presents detailed teachings about pranayama, mudras, diet, and much more, all interwoven with stories and personal anecdotes. Taken together, the rare correspondence and personal chronicles provide an unparalleled glimpse into the life of a yogi, the development of yoga in the West, and the ways that spiritual wealth is disseminated across generations.

Marion (Mugs) McConnell was first introduced to yoga as a teenager in 1973. She has been practicing yoga ever since, and teaching since 1978. Her passion for this ancient practice and its many boundless layers of wisdom beyond the physical led her to study under Swami Vishnudevananda. She graduated from the Sivananda Yoga Vedanta Centre as a Yoga Acharya in 1978. In 1977 Mugs became a student of Yogiraj Dr. Hari Dickman, a disciple of Swami Sivananda and Paramhansa Yogananda.

Mugs has been the Canadian Representative for the International Yoga Teachers Association (IYTA) since 1982. She is a founding member (1995) of the South Okanagan Yoga Academy and cocreator of its teacher-training program, a Yoga Alliance Registered Yoga School (RYS200/300 advanced), unique in its adherence to IYTA standards. She is an Experienced Registered Teacher with Yoga Alliance (E-RYT500) and has served on the Yoga Alliance Standards Committee since 2012. In 2012 Mugs received a Queen Elizabeth II Diamond Jubilee Medal for offering yoga in Canada and abroad for nearly forty years. In 2013 she was the recipient of a Certificate of Appreciation from IYTA in recognition of her contributions to yoga around the world.

Although Mugs is a disciple of the Sivananda tradition, her more recent teachers have included Namadeva Acharya in mantra therapy and Erich Schiffmann in Freedom Yoga, as well as Rod Stryker, Dharma Mittra, Mark Stephens, Ganga White, and Tracey Rich. These teachers have created a platform for Mugs to take her great love and respect of classical yoga and weave it together with modern-day wisdom, ensuring her students are always exposed to yoga right back to its roots.
Mugs has been leading yoga teacher trainings for twenty years. She currently holds trainings four times a year and manages SOYA teacher trainings, which are held annually in four additional SOYA satellite locations in British Columbia, Alberta, and Mexico. She presents workshops in Canada, the United States, Spain, Mexico, and Australia. Mugs is a regular contributor to the IYTA International Light magazine and manager of the SOYA monthly e-newsletter for the past eight years.

Mugs lives with her husband, Robert, in British Columbia and Mexico. Letters from the Yoga Masters is her first book.

Praise For Letters from the Yoga Masters: Teachings Revealed through Correspondence from Paramhansa Yogananda, Ramana Maharshi, Swami Sivananda, and Others…

“Marion (Mugs) McConnell has written a gem of a book that brings to life not only her central subject—the life of ‘forgotten yogi’ Hari Dickman—but her own extraordinary presence on the yoga path. As a woman who is entirely committed to exploring and living in various circumstances but always guided by the teachings she receives, McConnell reveals deeply insightful reflections on many of the lesser-known but profound aspects of yoga practice. This a personal story that celebrates the life of a devoted yoga teacher whose pupil—McConnell—is in today’s world among the most brightly shining lights.”
—Mark Stephens, author of Teaching Yoga, Yoga Sequencing, and Yoga Adjustments

“Letters from the Yoga Masters is wrapped in sweet gratitude—it is not only informative, but a guide to living with greater peace.”
—Neil Pearson, PT, author of Understand Pain, Live Well Again

“This book is a ‘must-read’ for every sincere and dedicated yoga sadhaka as it provides a glimpse of beautiful soulful responses elicited from great masters by the questioning spirit manifesting through a dedicated seeker in Dr. Harry (Hari) Dickman. As an ideal student of a great teacher, Marion McConnell has done commendable seva (selfless service) for the cause of yoga in bringing all of these historical documents together. She lays out in intricate detail some very rare techniques of pranayama, mudra, and dhyana that are gems for all sincere students. Beautiful stories to enliven the spirit embellish the end of this lovely treatise that will serve as a guide for so many spiritual seekers in time to come.”
—Yogacharya Dr. Ananda Balayogi Bhavanani, chairman of the International Centre for Yoga Education and Research (ICYER) at Ananda Ashram, Pondicherry, India.

“Letters from the Yoga Masters is a beautifully written account of the relationship between student and teacher. Marion gifts us rich history and a clear sense of the yogic teachings that Dr. Harry Dickman taught her as he learned from numerous yoga masters. This rare look at a beautifully lived and spiritually very rich life is a must-read for all those on the path of yoga.”
—Brenda Feuerstein, director of traditional yoga studies; founder/director of Georg Feuerstein Inner Freedom Project; coauthor with Georg Feuerstein, PhD, of The Bhagavad-Gita: A New Translation, The Matrix of Yoga, Green Dharma, and Green Yoga

“This jewel of a book is a fitting tribute to a great soul, offered lovingly by his dedicated student. How fortunate that the yogic knowledge Dr. Dickman gained from many revered teachers has been preserved so carefully and faithfully that it can enrich the lives of many spiritual seekers who otherwise would never have known of him.”
—Nayaswami Gyandev McCord, PhD, director of Ananda Yoga, cofounder of Yoga Alliance

“Some things should not be lost. Letters from the Yoga Masters is a uniquely valuable book containing wisdom and advice from most of the well-known and respected yoga masters of India in the twentieth century. McConnell has done a commendable job preserving this knowledge and presents the stories and teachings in a very entertaining way.”
—Bernie Clark, author of YinSights: A Journey into the Philosophy and Practice of Yin Yoga, From the Gita to the Grail: Exploring Yoga Stories & Western Myth, and coauthor with Sarah Powers of The Complete Guide to Yin Yoga: The Philosophy and Practice of Yin Yoga

“McConnell provides glimpses into the modern history and practice of yoga that no one else could have given us. As the private student of an acharya who was himself taught by Swami Sivananda, Shyam Sundar Goswami, and other great masters, she was privy to exchanges of knowledge and wisdom known to no one else. We are lucky indeed that these precious letters have survived for our benefit.”
—William Phillips (Shantideva), disciple of Dr. Swami Gitananda Giri and author of Laya Yoga Kriyas (CD)

“Letters from the Yoga Masters is an extraordinary presentation on yoga built around extracts from private letters written by Paramhansa Yogananda, Swami Sivananda, Ramana Maharshi, and others, to Dr. Hari Dickman, founder of the Latvian Yoga Society in the 1930s. McConnell offers clear instruction and enjoyable reading supported by rare original writings from these revered yoga masters. She provides insights into a pioneering advanced yogi during the historical spread of yoga teachings to the West. A treasure for beginner and advanced yoga students.”
—Bill Francis Barry, Vedic priest, spiritual teacher/counselor

“It is rare that someone in their teens has the insight to understand their Dharma (life purpose).  In the early 1970s Marion (Mugs) McConnell followed her innate wisdom to follow a path of yoga, which led her to Dr. Hari Dickman, one of many wise yogis who recognized the glowing Spirit within this young woman. With so many books about “doing yoga” I feel it is commendable that someone with Marion’s experience has meticulously documented the deeper aspects of yoga in Letters from the Yoga Masters, which in years to come will be a valuable and inspiring volume in the history of yoga in the West.”
Mary-Louise Parkinson, president of International Yoga Teachers Association
or
Buy Here
Copyright © 2020 American Booksellers Association