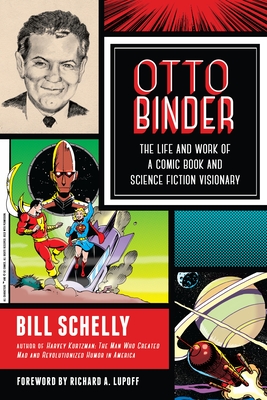 Otto Binder: The Life and Work of a Comic Book and Science Fiction Visionary chronicles the career of Otto Binder, from pulp magazine author to writer of Supergirl, Captain Marvel, and Superman comics. As the originator of the first sentient robot in literature ("I, Robot," published in Amazing Stories in 1939 and predating Isaac Asimov's collection of the same name), Binder's effect on science fiction was profound. Within the world of comic books, he created or co-created much of the Superman universe, including Smallville; Krypto, Superboy's dog; Supergirl; and the villain Braniac. Binder is also credited with writing many of the first "Bizarro" storylines for DC Comics, as well as for being the main writer for the Captain Marvel comics. In later years, Binder expanded from comic books into pure science writing, publishing dozens of books and articles on the subject of satellites and space travel as well as UFOs and extraterrestrial life. Comic book historian Bill Schelly tells the tale of Otto Binder through comic panels, personal letters, and interviews with Binder's own family and friends. Schelly weaves together Binder's professional successes and personal tragedies, including the death of Binder's only daughter and his wife's struggle with mental illness. A touching and human story, Otto Binder: The Life and Work of a Comic Book and Science Fiction Visionary is a biography that is both meticulously researched and beautifully told, keeping alive Binder's spirit of scientific curiosity and whimsy.

Praise For Otto Binder: The Life and Work of a Comic Book and Science Fiction Visionary…

“Otto Binder was a kind of titan, a precursor of the gods … because he came up with basic primordial forms that later writers would perhaps polish to a greater luster. But Binder hewed them out of solid rock. He was mining the raw material.”
—Alan Moore, author of Watchmen and V for Vendetta

“Bill Schelly has an obsessive yet intelligent passion for things many might consider marginal if not bizarre—always the mark of an interesting mind.”
—Tom Robbins, author of Even Cowgirls Get the Blues

“Bill Schelly has done an amazing job of capturing Otto and his family and friends, and explaining in an interesting way why his work was so important and precedent-setting.”
—Michael Uslan, executive producer of The Dark Knight Rises

“Schelly truly brings Binder alive on the page. He crafts a candid and sympathetic portrait that makes you feel that you have gotten to know the man almost as vividly as if you had met him in real life.”
—Paul Gravett, Comic Book Marketplace

Bill Schelly has been immersed in the world of science fiction and comics since the mid-1960s, making his first contributions to the pop culture fringe through his comics fanzine Sense of Wonder. Schelly began meticulously researching the history of comics fandom in the 1990s and has since published many books on the subject. He is currently the associate editor of the Eisner Award-winning magazine Alter Ego. His recent books include The American Comic Book Chronicles: The 1950s and Harvey Kurtzman, The Man Who Created Mad.
Loading...
or
Not Currently Available for Direct Purchase