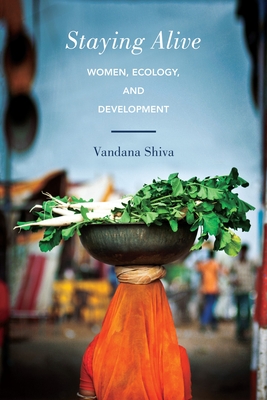 Inspired by women’s struggles for the protection of nature as a condition for human survival, award-winning environmentalist Vandana Shiva shows how ecological destruction and the marginalization of women are not inevitable, economically or scientifically. She argues that “maldevelopment”—the violation of the integrity of organic, interconnected, and interdependent systems that sets in motion a process of exploitation, inequality, and injustice—is dragging the world down a path of self-destruction, threatening survival itself. Shiva articulates how rural Indian women experience and perceive ecological destruction and its causes, and how they have conceived and initiated processes to arrest the destruction of nature and begin its regeneration. Focusing on science and development as patriarchal projects, Staying Alive is a powerfully relevant book that positions women not solely as survivors of the crisis, but as the source of crucial insights and visions to guide our struggle.

“Vandana Shiva is one of the world's most prominent radical scientists. In Staying Alive she defines the links between ecological crises, colonialism, and the oppression of women. It is a scholarly and polemical plea for the rediscovery of the ‘feminine principle’ in human interaction with the natural world, not as a gender-based quality, rather an organizing principle, a way of seeing the world.”
—The Guardian

“Extraordinary in the ease of its global and historical scopes and the clarity of its arguments.”
—Women’s Review of Books

“Laced with references to Hindu deities, hard-nosed research into Indian land use and bold attacks on Western science … Staying Alive … has the ‘go’ of a big personality behind it.”
—The Observer

“Shiva is burst of creative energy, an intellectual power.”
—The Progressive

Vandana Shiva is a physicist, world-renowned environmental thinker and activist, and a tireless crusader for economic, food, and gender justice. She is the author and editor of many influential books, including Making Peace with the Earth, Earth Democracy, Soil Not Oil, Stolen Harvest, Water Wars, and Globalization’s New Wars. Dr. Shiva is the recipient of more than twenty international awards, among them the Right Livelihood Award (1993); the John Lennon-Yoko Ono Grant for Peace (2008); The Sydney Peace Prize (2010); and the Calgary Peace Prize (Canada, 2011). In addition, she is a board member of the World Future Council and one of the leaders and board members of the International Forum on Globalization (whose other members include Jerry Mander, Edward Goldsmith, Ralph Nader, and Jeremy Rifkin). She travels frequently to speak at conferences around the world.
Loading...
or support indie stores by buying on