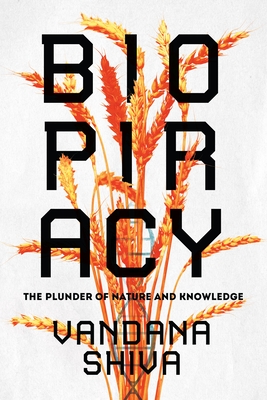 Genetic engineering and the cloning of organisms are “the ultimate expression of the commercialization of science and the commodification of nature.… Life itself is being colonized,” according to renowned environmentalist Vandana Shiva. The resistance to this biopiracy, she argues, is the struggle to conserve both cultural and biological diversity. As the land, forests, oceans, and atmosphere have already been colonized, eroded, and polluted, corporations are now looking for new colonies to exploit and invade for further accumulation—in Shiva’s view, the interior spaces of the bodies of women, plants, and animals. Featuring a new introduction by the author, this edition of Biopiracy is a learned, clear, and passionately stated objection to the ways in which Western businesses are being allowed to expropriate natural processes and traditional forms of knowledge.


Praise For Biopiracy: The Plunder of Nature and Knowledge…

“Biopiracy is a path-breaking work on one of the most important issues of the coming century.… Vandana Shiva's inspiring book is a clarion call … (that) should be widely read and discussed by everyone concerned by the fate of the Earth.”
—Jeremy Rifkin, author of The Third Industrial Revolution: How Lateral Power Is Transforming Energy, the Economy, and the World and The Zero Marginal Cost Society: The Internet of Things, the Collaborative Commons, and the Eclipse of Capitalism

“With her characteristic blend of analysis and passion, Vandana Shiva traces the continuity from the European colonization of 'native' peoples … to the present appropriation of the natural resources they need for their physical and cultural survival. An important book that should be read by anyone wanting to understand the global threat posed by the technological transformations of organisms, cells, and molecules and by their exploitation and profit.”
—Ruth Hubbard, professor emerita of biology, Harvard University

Vandana Shiva is a physicist, world-renowned environmental thinker and activist, and a tireless crusader for economic, food, and gender justice. She is the author and editor of many influential books, including Making Peace with the Earth, Earth Democracy, Soil Not Oil, Stolen Harvest, Water Wars, and Globalization’s New Wars. Dr. Shiva is the recipient of more than twenty international awards, among them the Right Livelihood Award (1993); the John Lennon-Yoko Ono Grant for Peace (2008); The Sydney Peace Prize (2010); and the Calgary Peace Prize (Canada, 2011). In addition, she is a board member of the World Future Council and one of the leaders and board members of the International Forum on Globalization (whose other members include Jerry Mander, Edward Goldsmith, Ralph Nader, and Jeremy Rifkin). She travels frequently to speak at conferences around the world.
or
Not Currently Available for Direct Purchase