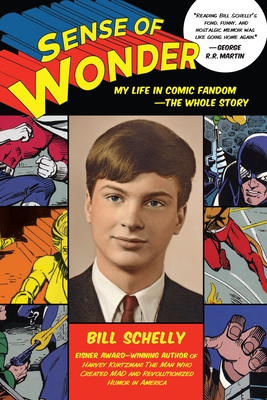 A fascinating story of growing up as a gay fan of comic books in the 1960s, building a fifty-year career as an award-winning writer, and interacting with acclaimed comic book legends

Award-winning writer Bill Schelly relates how comics and fandom saved his life in this engrossing story that begins in the burgeoning comic fandom movement of the 1960s and follows the twists and turns of a career that spanned fifty years. Schelly recounts his struggle to come out at a time when homosexuality was considered a mental illness, how the egalitarian nature of fandom offered a safe haven for those who were different, and how his need for creative expression eventually overcame all obstacles. He describes living through the AIDS epidemic, finding the love of his life, and his unorthodox route to becoming a father. He also details his personal encounters with major talents of 1960s comics, such as Steve Ditko (co-creator of Spider-Man), Jim Shooter (writer for DC and later editor-in-chief of Marvel Comics), and Julius Schwartz (legendary architect of the Silver Age of comics).

Praise For Sense of Wonder: My Life in Comic Fandom--The Whole Story…

“For decades, comics superfan and historian Bill Schelly had a secret identity, but in Sense of Wonder he pulls off the mask and tells the world how growing up as a comic book fan—and gay—influenced his life. Men in tights, gaining empowerment, gay parenting, love lost, and found … Schelly lays it all bare in a frank and fascinating way.”
—Andy Mangels, best-selling author of Star Trek and Star Wars and founder of the Gays in Comics Panel at Comic-Con International

“Passionate and magnificent! Bill Schelly was one of those integral people responsible for nurturing and growing comic book fandom until the rest of the planet finally began to join us, bringing comic books and superheroes from the subversive to the mainstream. For that, the entire world today owes him its thanks for a job well done!”
—Michael Uslan, executive producer of Batman Begins, The Dark Knight, and The Dark Knight Rises

“The author is living proof that a lifelong passion can pay off in countless ways, both personal and professional. Long live fandom!”
—Leonard Maltin, film critic for Entertainment Tonight

"The core audience for this memoir of a life in thrall to comics is Schelly’s fellow fans, but his reminiscences of this bygone subculture long before superheroes entered the mainstream warrants a wider readership."
—Booklist

BILL SCHELLY has been chronicling and adding to the pop culture fringes since the mid-1960s. He became widely known in the comics community thanks to his popular fanzine Sense of Wonder (1967-1972). In 1998, he became associate editor of the Eisner Award-winning magazine Alter Ego, a post he still holds. Schelly has written several biographies of film and comics artists, including comedian Harry Langdon and Joe Kubert. His American Comic Book Chronicles: The 1950s was nominated for a Harvey Award. He recently authored Harvey Kurtzman, The Man Who Created Mad and Revolutionized Humor in America, which was published in 2015. It received the Will Eisner Comics Industry Award in 2016 for Best Comics-Related Book. Schelly has also received an Inkpot Award from Comic-Con International: San Diego.
Loading...
or
Not Currently Available for Direct Purchase