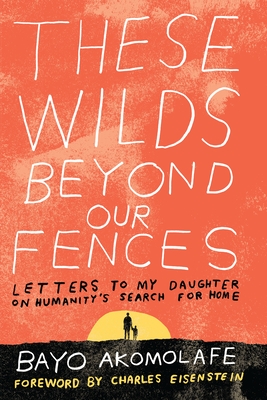 These Wilds Beyond Our Fences

Letters to My Daughter on Humanity's Search for Home

Tackling some of the world’s most profound questions through the intimate lens of fatherhood, Bayo Akomolafe embarks on a journey of discovery as he maps the contours of the spaces between himself and his three-year-old daughter, Alethea. In a narrative that manages to be both intricate and unguarded, he discovers that something as commonplace as becoming a father is a cosmic event of unprecedented proportions. Using this realization as a touchstone, he is led to consider the strangeness of his own soul, contemplate the myths and rituals of modernity, ask questions about food and justice, ponder what it means to be human, evaluate what we can do about climate change, and wonder what our collective yearnings for a better world tell us about ourselves. These Wilds Beyond Our Fences is a passionate attempt to make sense of our disconnection in a world where it is easy to feel untethered and lost. It is a father’s search for meaning, for a place of belonging, and for reassurance that the world will embrace and support our children once we are gone.

Bayo Akomolafe left a teaching position as a professor and clinical psychologist in a Nigerian university to pursue “a small and intense life”— a life outside the highways of the familiar, outside of fences. In a sense, his decolonizing journey in the wilds, in the borderlands of globalizing culture, began when he met Ijeoma, his wife of Indian and African descent, and when a healer suggested to him “that I could find my way if I were willing to become generously lost.” His quest is to tell the stories of the occluded, to make room for other spaces of power and invite the proliferation of multiple natures. This, his first book is a foray into the ordinary “which the extraordinary is always trying to become.” Akomolafe lectures and gives talks internationally, mostly keynote speeches, and is Chief Curator for an earth-wide commonwealth of curators working from a different ethos of responsivity, called The Emergence Network. He currently lives in India with his “life-force,” Ijeoma (or Ej), and their two children: Alethea Aanya and Kyah Jayden.
Loading...
or support indie stores by buying on