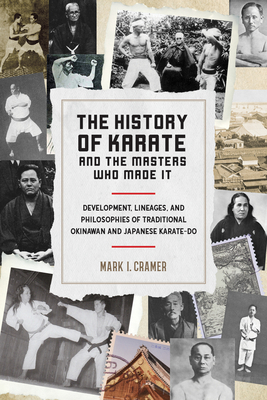 The History of Karate and the Masters Who Made It

Development, Lineages, and Philosophies of Traditional Okinawan and Japanese Karate-do

A concise yet comprehensive history of traditional Okinawan and Japanese karate, with biographies of the great karate masters

This concise-yet-comprehensive history of traditional Okinawan and Japanese karate includes authoritative biographies of the great karate masters of the past and the philosophical issues they faced as karate changed and evolved. Bringing a fresh understanding to the study of the martial arts, Mark I. Cramer dispels many of the often-repeated martial-arts myths as he details the lineages of the modern styles of karate and describes the social, cultural, and political events that influenced them. While most books focus on a single style of karate or the biography of just one of the great teachers, this book offers a well-researched and detailed overview. By bringing all of this knowledge together in one volume, Cramer—an award-winning inductee into the USA Karate Federation’s Hall of Fame—fills a crucial gap.

Praise For The History of Karate and the Masters Who Made It: Development, Lineages, and Philosophies of Traditional Okinawan and Japanese Karate-do…

“Sensei Mark Cramer’s writing is a perfect reflection of his training: methodical, thorough, and insightful. This no-nonsense and academic approach to karate’s history is a must-read for any serious student of the martial arts.”
—Charles Fink, MEd, Godan, sessional instructor, Karate, School of Human Kinetics, Laurentian University

“Mark Cramer has created an engaging, highly readable, and anecdotal history of karate, which I predict will become the go-to book for all those interested in the evolution of modern Japanese and Okinawan karate-do.”
—James Pounds, Rokudan, Secretary, Goju-Ryu Karatedo Seiwakai, North America
Head Instructor, Seiwakai of Texas

MARK I. CRAMER has had a long involvement with sport karate-do and has competed in kata, kumite, and kobudo (weapons) divisions in the United States, Canada, and Japan. He began his karate-do training in 1971 at Kent State University, and began training in goju ryu in 1974. He is a member of the Seiwa Kai Goju Ryu Karatedo, the Japan Karatedo Federation (JKF) Goju Kai, and the Dai Nippon Butoku Kai. Cramer has practiced extensively at JKF Goju Kai Seminars and Seiwa Kai Seminars in Japan, Mexico, Canada, and the United States and has trained more than forty individuals to the black belt level and beyond. In over forty years of training and competing, he has won many awards, including an induction into the USA Karate Federation's Hall of Fame in 2001. He edits and is a contributing author for the Pan-American Seiwa Kai Goju Ryu Karatedo Newsletter.
Loading...
or
Not Currently Available for Direct Purchase