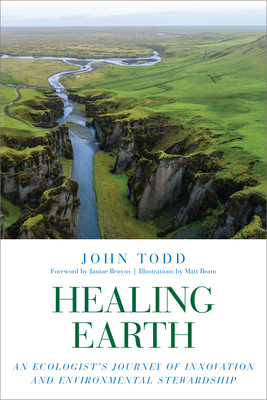 An Ecologist's Journey of Innovation and Environmental Stewardship

A true pioneer and respected elder in ecological recovery and sustainability shares effective solutions he has designed and implemented.

A stand-out from the sea of despairing messages about climate change, well-known sustainability elder John Todd, who has taught, mentored, and inspired such well-known names in the field as Janine Benyus, Bill McKibben, and Paul Hawken, chronicles the different ecological interventions he has created over the course of his career. Each chapter offers a workable engineering solution to an existing environmental problem: healing the aftermath of mountain-top removal and valley-fill coal mining in Appalachia, using windmills and injections of bacteria to restore the health of a polluted New England pond, working with community members in a South African village to protect an important river. A mix of both success stories and concrete suggestions for solutions to tackle as yet unresolved issues, Todd's narrative provides an important addition to the conversation about specific ways we can address the planetary crisis. Eighty-five color photos and images illustrate Todd's concepts. This is a refreshingly hopeful, proactive book and also a personal story that covers a known practitioner's groundbreaking career.

Praise For Healing Earth: An Ecologist's Journey of Innovation and Environmental Stewardship…

“John Todd has a sixth sense for the Creation, a deep feeling for ecology, and the practical ingenuity of a brilliant inventor. This is the story of possibilities, healing, restoration, and redemption—about coming home to Earth as a partner and cocreator.”
—David W. Orr, Paul Sears Distinguished Professor of Environmental Studies and Politics

“Healing Earth is a rare gem of a beautifully illustrated book and a valuable resource for anyone ready to engage in ecosystems restoration or regenerative development. The book can be regarded as John’s memoirs, distilling 50 years of professional practice in ecological design and engineering into a delightful and informative read. It offers a passionate testimony to humanity’s potential to create conditions conducive to life by healing the Earth and her people.”
— Dr. Daniel Christian Wahl, author of Designing Regenerative Cultures

A pioneer in ecological design, John Todd has been active in shaping the discipline for more than years. He has befriended and inspired such well-known figures in the field as Janine Benyus, Bill McKibben, Paul Hawken, David Orr, and Wes Jackson. Together with his wife, Nancy Jack Todd, Todd was named as a visionary of the twentieth century by the British organization Resurgence, and he has been featured in “The Genius Issue” of Esquire magazine. Dr. Todd was also named one of the twentieth century’s top thirty-five inventors by the Lemelson-MIT Program for Invention and Innovation. In 2010 the Smithsonian Institution recognized his eco-machine at the Center for Sustainable Living, part of the Omega Institute in Rhinebeck, New York, as a significant design breakthrough. The drawings and film of the project were displayed in the Smithsonian’s Cooper-Hewitt Museum of Design in New York City.
Loading...
or
Not Currently Available for Direct Purchase