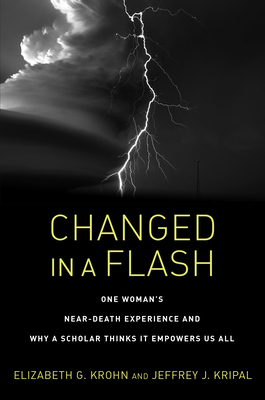 Changed in a Flash

A fascinating first-hand account of an awakening into a psychic consciousness, paired with a revolutionary analysis by a respected professor of religion

When Elizabeth Greenfield Krohn got out of her car with her two young sons in the parking lot of her synagogue on a late afternoon in September 1988, she couldn't have anticipated she would within seconds be struck by lightning and have a near-death experience. She felt herself transported to a garden and engaging in a revelatory conversation with a spiritual being. When she recovered, her most fundamental understandings of what the world is and how it works had been completely transformed. She was “changed in a flash,” suddenly able to interact with those who had died and have prescient dreams predicting news events. She came to believe that some early traumatic and abusive experiences had played a part in preparing her for this experience.

Told in matter-of-fact language, the first half of this book is the story of Krohn’s journey, and the second is an interpretation and analysis by respected professor of religion Jeffrey J. Kripal. He places Krohn's experience in the context of religious traditions and proposes the groundbreaking idea that we are shaping our own experiences in the future by how we engage with near-death experiences in the present. Changed in a Flash is not about proving a story, but about carving out space for serious discussion of this phenomenon.

Praise For Changed in a Flash: One Woman's Near-Death Experience and Why a Scholar Thinks It Empowers Us All…

“Changed in a Flash is a captivating collaboration between a remarkable woman who survived a lightning strike, only to discover inexplicable new—but not always welcomed—abilities and insights, and an acclaimed scholar of religious studies. Elizabeth Krohn’s spellbinding account of her experience and its striking after effects will astound you, and Jeffrey Kripal’s examination of their potentially revolutionary implications will inspire you to rethink how you understand humanity, death, and an afterlife.”
—Bruce Greyson, MD, Carlson Professor Emeritus of Psychiatry & Neurobehavioral Sciences, Division of Perceptual Studies, University of Virginia School of Medicine

“Near-Death Experiences are often recalled as shockingly vivid events with unexpected consequences, including newfound psychic abilities. Such a case is covered in the first part of the book. But it’s the second part that explores how to interpret the meaning of NDEs. Are they literally true reports of the afterlife, or hallucinatory dreams of a dying brain, or something much stranger? Changed in a Flash explores each of these interpretations, and it ends with a stunning conclusion. A thoughtful, fresh look at NDEs that threatens to exceed your boggle threshold. Highly recommended.”
—Dean Radin PhD, chief scientist, Institute of Noetic Sciences, author, Real Magic

ELIZABETH GREENFIELD KROHN was a wife and mother of two young boys when she was struck by lightning in the parking lot of her Houston synagogue, and her most fundamental understandings of what the world is and how it works were completely transformed. She is now a grandmother living in Houston.

JEFFREY J. KRIPAL is a well-known professor of religion at Rice University and the codirector of Esalen's Center for Theory and Research. He is the author of many books on religion and unexplained phenomena, including, with Whitley Streiber, The Super Natural. He is a key figure in consciousness studies within academia and beyond.
Loading...
or support indie stores by buying on