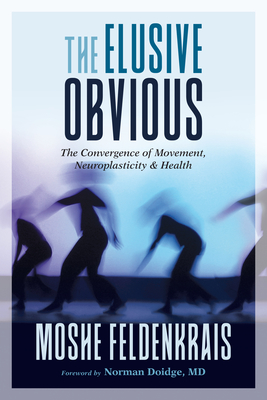 The Convergence of Movement, Neuroplasticity, and Health

Scientist, martial artist, and founder of the method that bears his name, Moshe Feldenkrais wrote several influential books on the relationship between movement, learning, and health. In The Elusive Obvious he presents ideas that are more relevant today than when the book was first published, as current research strongly supports many of the insights on which the Feldenkrais Method is based. This beautiful new edition is ready to be treasured by an emerging generation of somatic practitioners, movement teachers, performing artists, and anyone interested in self-improvement and healing. The two main strands of the Feldenkrais Method—Awareness Through Movement and Functional Integration—are now known by many around the world for reducing pain and anxiety, cultivating vitality, and improving performance. The Elusive Obvious presents a thorough and accessible explanation of the Feldenkrais Method, and, as its title indicates, throws light on the solutions to many of our difficulties that are hidden in plain sight.

Praise For The Elusive Obvious: The Convergence of Movement, Neuroplasticity, and Health…

“The Elusive Obvious gives readers a sense of what it may have been like to be with Feldenkrais in person. Across the pages, Feldenkrais’s take on a range of topics is punctuated with flashes of brilliance (such as the exchange between him and anthropologist Margaret Mead), and occasional free associations, but he always circles back to his primary interest in habits, how we learn, and how to learn better or more gratifying ways of performing actions. It is here, in The Elusive Obvious, more than any other work of his that I know, that Feldenkrais makes clear the extent to which his understanding of brain plasticity informed his discoveries of how to help people, and it shows the firm scientific ground his method rested on.”
—Norman Doidge, MD, from the foreword

“A neck injury prevented me from playing my cello for almost a year. The Feldenkrais Method has saved my career and enabled me to live a fuller life. The method helped me shift from elusive sensations to obvious, clear, and specific ones, which resulted in a more organic and efficient functioning. Noticing habitual patterns of my body and mind, and allowing myself to experience new sensations and possibilities, resulted in immense growth in my cello performance, my teaching, and my experience of life. I highly recommend that you read The Elusive Obvious, Dr. Feldenkrais's clearly written explanation of his method.”
—Uri Vardi, professor of cello, University of Wisconsin-Madison

“Moshe Feldenkrais was a unique visionary, and a great philosopher of consciousness and human evolution. The Elusive Obvious is an outstanding presentation of his powerful ways of viewing and improving life.”
—Russell Delman, founder of The Embodied Life School

“In The Elusive Obvious we encounter a compelling intelligence that is ahead of its time. It encourages us to promote a more holistic view of human knowledge, capacity, and potency, a view of knowledge that includes embodied attention and experience. Indeed, we learn that we can recover what eluded us.”
—Jennifer Kayle, associate professor, director of graduate studies department of dance, University of Iowa

“The Elusive Obvious is Moshe Feldenkrais’s most accessible book and covers his most profound ideas and the fundamental principles behind his method. It is an absolute must-read for anyone interested in the processes of learning, healing, and self-improvement.”
—Marek Wyszynski, physical therapist, cofounder of The Feldenkrais Institute of New York

“Dr Feldenkrais was a seminal twentieth-century thinker. In the Awareness Through Movement system he coached us to move better, hurt less, and have more choices. His teaching stresses a gentle and natural framework for self-healing. The Elusive Obvious presents the scientific logic for his unique method.”
—Deborah Goldberg, MD, pain specialist

“Feldenkrais is not just pushing muscles around, but changing
things in the brain itself.”
—Karl Pribram, MD, neuroscientist

“Feldenkrais is one of the best ways to get in touch with your body and to open it up to new and better movements than you thought possible.”
—Hunter Pence, Major League Baseball player

“The Elusive Obvious brilliantly forecasts neuroscience research frameworks like embodied cognition, dynamic systems theory, and enactivism, which all confirm Dr. Feldenkrais’s insights gained from study, practice, and the sheer nerve to move against rivers of prevailing thought. Read this book for its breathtaking, concise, and compassionate wisdom; read to find courageous mantras for your personal practice; or read simply to walk alongside the endlessly hopeful, wise, and inquisitive mind of Dr. Moshe Feldenkrais.”
—Andrew Belser, professor of movement, voice, and acting, Pennsylvania State University

“Feldenkrais has studied the body in movement with a precision that I have found
nowhere else.”
—PETER BROOK, OBE, theater and film director

Dr. Moshe Feldenkrais, D.Sc., (1904-1984) was a distinguished scientist, physicist, and engineer, and the founder of the method that now bears his name. His insights contributed to the development of the new field of somatic education and continue to influence disciplines ranging from the arts to physical and occupational therapy.
Loading...
or
Not Currently Available for Direct Purchase