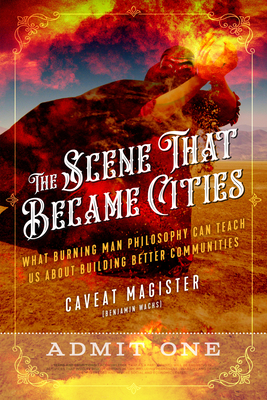 The Scene That Became Cities

What Burning Man Philosophy Can Teach Us about Building Better Communities

A practical and irreverent guide to Burning Man, its philosophy, why people do this to themselves, and how it matters to the world

Over 30 years Burning Man has gone from two families on a San Francisco beach to a global movement in which hundreds of thousands of people around the world create events on every continent. It has been the subject of fawning media profiles, an exhibit in the Smithsonian, and is beloved by tech billionaires and boho counterculturalists alike. But why does it matter? What does it actually have to offer us? The answer, Caveat Magister writes, is simple: Burning Man's philosophy can help us build better communities in which individuals' freedom to follow their own authentic passions also brings them together in common purpose. Burning Man is a prototype, and its philosophy is a how-to manual for better communities, that, instead of rules, offers principles. Featuring iconic and impossible stories from "the playa," interviews with Burning Man's founders and staff, and personal recollections of the late Larry Harvey--Burning Man's founder, "Chief Philosophical Officer," and the author's close friend and colleague--The Scene That Became Cities introduces readers to the experience of Burning Man; explains why it grew; posits how it could impact fields as diverse as art, economics, and politics; and makes the ideas behind it accessible, actionable, and useful.

Praise For The Scene That Became Cities: What Burning Man Philosophy Can Teach Us about Building Better Communities…

“Burning Man—the annual event in the Nevada desert that has been described as an experiment in community and art—has spawned, if not a philosophy and practice, a worldview and movement.”
—Publishers Weekly

“This wise and insightful book by Caveat Magister, one of Burning Man founder Larry Harvey’s muses, takes us on a sublime and illuminating journey that helps explain why the world needs Burning Man and its Ten Principles more than ever.”
—Chip Conley, author of PEAK: How Great Companies Get Their Mojo from Maslow

“Deeply personal yet accessible, The Scene That Became Cities is a first of its kind in the genre of Burning Man literature. The wide-ranging, exemplary discussions thoughtfully cover topics from whether Burning Man truly facilitates individual transformations, to its relevance in the political sphere, to how to translate the principle of radical inclusion, to what Burning Man can offer broader society.”
—Katherine K. Chen, associate professor in the Department of Sociology, The City College of New York

For the last ten years, Caveat Magister, aka Benjamin Wachs, has been actively writing about Burning Man culture and engaging with Burning Man at the cutting edge of its philosophy, composing over 250 articles about it for the Burning Man website. By 2015, this work had made him, outside of Larry Harvey and his fellow founders, one of the leading interpreters of Burning Man within its own culture. In 2015, Larry Harvey asked Caveat, along with Burning Man's Director of Education, Stuart Mangrum, to sit on a committee, officially called the "Philosophical Center" of the Burning Man nonprofit.
Loading...
or
Not Currently Available for Direct Purchase