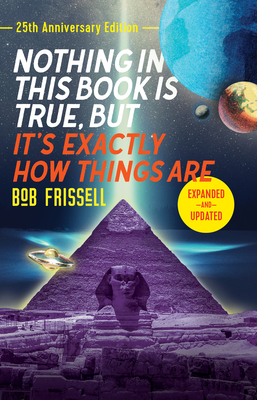 Nothing in This Book Is True, But It's Exactly How Things Are, 25th Anniversary Edition

The twenty-fifth anniversary edition of this underground classic explores higher consciousness, human evolution, metaphysics, sacred geometry, the secret government, and more
• Gives clear instructions on MerKaBa (Light Body) activation and the companion Unity Breath
• Details our ancient past as seen through the eyes of the Ascended Masters
• Provides exercises, tools, and techniques to clear the energies blocking your access to your Higher Self

In this special edition, Bob Frissell has kept intact the basic message of the previous edition; he has also expanded upon it by including significant additions and updates to virtually every chapter, including ten completely new chapters. The author details from a big-picture perspective the enormous infusion of higher dimensional energy that is dramatically raising the vibratory rate of the planet and everyone on it. He also gives the details of the personal transformation that we must make if we are to survive and thrive, so we can “catch the ride” into higher consciousness in a way that enables Mother Earth to reach critical mass and become “lit from within.” This is the story of nothing less than the birth of a new humanity, of the cocreation of Heaven on Earth.

Through the Right Eye of Horus, around the circles and spirals of sacred geometry, in and out of the magic of Breath Alchemy, even surviving the potentially cataclysmic pole shifts intact, we will eventually assemble internally our own MerKaBa, the universal pattern of creation, and join the Ascended Masters.

We will meet the forces working to advance our evolution of consciousness and those seeking to block it. When we reach critical mass, Mother Earth will shift into a higher dimensional level. Many galactic presences have already gathered around our planet, watching and waiting to observe this unprecedented event.

This is a time of great celebration as we move out of the darkness and into the light. It means that the veils will be lifted, we will remember and live our intimate connection to all life, and we will be allowed to reunite with our cosmic brothers and to move about the universe. We will completely redefine what it means to be human!

Praise For Nothing in This Book Is True, But It's Exactly How Things Are, 25th Anniversary Edition…

“Bob Frissell has done it again. His groundbreaking book twenty-five years ago opened our minds to an amazing explosion of spiritual knowledge. Now in this twenty-fifth anniversary edition, Frissell surpasses himself with another breathtaking expansion of our understanding and experience of reality—and adds to it a full explanation of his powerful Five-Step Breath Alchemy healing technique. No better guide exists to the deeper nature of reality.”
—KENNETH PORTER, MD, psychiatrist, psychoanalyst, and former president of the Association for Spirituality and Psychotherapy

“I had read the first version of this book, and it had a profound effect on my life. This new version is an eye-opener that further unravels mysteries and coverups. Frissell’s divine insight has uncovered hidden truths that raise our consciousness and have the power to change our lives and the world as we now know it. Frissell has definitely tuned into the Creator Frequency! If you are searching for Truth, I highly recommend this book.”
—DIANNE ROBBINS, author of Messages from the Hollow Earth

“If you’re looking for a fast-paced, eye-opening, big-picture, wild ride of a book, here you go! Bob Frissell sweeps aside the veils of conventional reality to explore what’s happening behind the scenes—from extraterrestrial visitations and multidimensional events to walk-ins and ascended masters relating the ‘true history of the world.’ This twenty-five-year updated version emphasizes the desperate need for global change and personal transformation. We live in critical times that can be deeply moving—but we must listen, feel, and sense at deeper levels, expanding our hearts to move beyond right and wrong, us and them, as we open to All That Is. As Frissell notes, this is the story of nothing less than the birth of a new humanity and the cocreation of Heaven on Earth.”
—DAWN BRUNKE, author of Animal Voices

“The twenty-fifth anniversary edition of Nothing in This Book Is True, But It’s Exactly How Things Are gave me my first ‘real’ understanding of how life on this planet came into existence—
resonating deep within me and thus vibrating within my entire being. It’s as though this new truth that I felt changing me from the inside out and in such a profound way that my body’s internal mechanisms and operations machines were now self-aware. My mind, body, and spirit connected with this information so well that I took the full download all at once, hungry for more.”
—LAILA FADIAL, Galaxy Press

“If ever there was an aptly named book, this is it. In a highly readable and sincere manner, Nothing in This Book Is True But It’s Exactly How Things Are proceeds to thread together every New Age belief and conspiracy theory into a grand unified field theory of kookiness. They’re all here: gray aliens, ascended masters, free energy, angels, cattle mutilations, crop circles, Breath Alchemy, earth changes, the Great Pyramid, Sirius, and secret colonies on Mars. And yet, despite the sheer unbelievability of half the book, the author’s goodwill and spiritual intentions are so infectious that the book ends up being a heartwarming experience.”
—JAY KINNEY, Wired magazine

BOB FRISSELL is the founder of the Breath Alchemy Technique and is a teacher of thirty-six years. His books are regarded as underground spiritual classics. In addition to Nothing In This Book Is True, But It’s Exactly How Things Are, he is the author of Something In This Book Is True... and You Are a Spiritual Being Having a Human Experience. His books are published in twenty-five languages and are available in more than thirty countries. Musicians have credited the ideas presented in Frissell's books as a source of inspiration for their own creative work. This list includes Tool (band), Danny Carey, and Gojira (band). He is also the author of Stress Management Breakthrough: Transforming Suffering into Bliss, Infinite Consciousness Is the Only Truth: Everything Else Is Illusion, Breath Alchemy: Your Complete Guide to a Harmonized Life as well as the video, audio, and ebook series Igniting Your Inner Light. He is on a mission to helping as many thousands of men and women as he can in opening them up to their unlimited potential by discovering that the resolution to any unwanted condition lies within them!

Frissell gives private Breath Alchemy lessons on Skype and in person, along with coaching consultations on Skype. Frissell has been a featured speaker at the Global Congress of Spiritual Scientists in Bangalore, India; the fourth annual Symbiosis Gathering at Yosemite; the Prophets Conference in Tulum; and many New Living expos. He has also appeared on numerous talk shows, including The Jeff Rense Program, Red Ice Radio, Far Out Radio, and has been a three-time guest on Coast to Coast AM. He has presented his workshops throughout North America, Australia, and Europe. On a personal note, Frissell is a nature enthusiast. He loves to hike and all manner of cats, squirrels, ducks, wild turkeys, deer, and redwood trees catch his eye. He lives in Sonoma, California.
Loading...
or
Not Currently Available for Direct Purchase