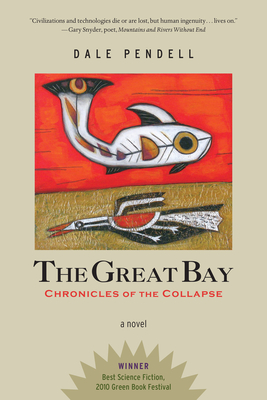 Chronicles of the Collapse

Combining a haunting view of the future caused by global warming with detailed maps that depict a massive transformation of California, Dale Pendell's unique and provocative fictitious account provides a powerful view of a not-so-improbable future in which sea levels rise and a decimated population must find new ways to live.

Based in scientific reality, The Great Bay presents a powerful fictional vision of a fast-approaching future in which sea levels rise and a decimated population must find new ways to live. The story begins in 2021 with a worldwide pandemic followed by the gradual rising of the seas. Pendell's vision is all encompassing--he describes the rising seas' impact on countries and continents around the world. But his imaginative storytelling focuses on California. A "great bay" forms in California's Central Valley and expands during a 16,000-year period. As the years pass, and technology seems to regress, even memory of a "precollapse" world blends into myth. Grizzly bears and other large predators return to the California hills, and civilization reverts to a richly imagined medieval society marked by guilds and pilgrimages, followed even later by hunting and gathering societies. Pendell's focus is on the lives of people struggling with love, wars, and physical survival thousands of years in California's future. He deftly mixes poetic imagery, news-reporting-style writing, interviews with survivors, and maps documenting the geographic changes. In the end, powerful human values that have been with us for 40,000 years begin to reemerge and remind us that they are desperately needed--in the present.

Praise For The Great Bay: Chronicles of the Collapse…

“An imaginative and thought-provoking look at life in California 16,000 years in the future after a global pandemic and environmental catastrophe in 2021.”
–San Francisco Chronicle

"Great extinctions have ravaged the planet before, and humanity is not immune. The Great Bay is a novel set in the far flung future. Disease ravages mankind and thousands of years in the future, the world has greatly changed, with technology not as prevalent as it once was. An environmental examination of the world and how humans can live in tune with it for a better future, The Great Bay is a wonderful concept with a solid message, highly recommended."
–Midwest Book Review

“The days I spent reading The Great Bay: Chronicles of the Collapse by Dale Pendell were uneasy ones… Perhaps Dale Pendell's gripping, chilling, and utterly believable fictional account of future life on earth will make all of us stop and think about what we want the future to look like. We don't want our worst nightmares to come true.”
–Read All Day

“In the tradition of J.M. Coetzee and Cormac McCarthy, Pendell's award-winning writing proves sophisticated and literary, raising critical questions for the future of humanity and the planet as it brings a startling contribution to the environmental concerns of the day.”
–The Union

“This is an amazing novel…it’s impossible to read and not do a lot of thinking about the future, as well as what we need to do about it – right now.”
–David Wilk, WritersCast

“A light boat, sailing across a broad bay, with the tops of ancient skyscrapers deep below. Our western North American world, hundreds and then thousands of years into the future. Dozens of remarkable stories, in the unfolding ecologies of post collapse, post climate change. Civilizations and technologies die or are lost, but human ingenuity–families, tribes, and villages, the musicians, shamans, philosophers, and people of power–live on.”
–Gary Snyder, poet, Mountains and Rivers Without End

“The Great Bay is an extraordinary book that thrives at the intersection of dystopian imagination and planet-scale history...A wise, cunning, and important book.”
–Steve Silberman, Contributing Editor, Wired

“This is a winner of the best of Science Fiction award from the Green Book Festival and it's easy to see why. It's a book of incredible scope and storytelling...I found it completely engrossing.”
–Robert Phoenix, The Daily Farcast

“The Great Bay is a wonderful addition to the subgenre of post-apocalyptic novels set in California...Pendell manages to communicate a wry earth wisdom and pragmatic DIY optimism about the big bummer that may very well lie ahead.”
–RoyChristopher.com

“I rate this book easily five of five stars; quite simply it is one of the best science fiction books of 2010.”
–Alternating Reality Books

"Pendell is uniquely placed to tell this tale. Of course his poetic skills make for vivid images and insights; unflinching depictions of horror mingle with tender compassion and irony in the early post-Collapse decades, while the later years give ample space for the broader strokes of his social and cultural imagination."
–Dreamflesh

"A kind of Decline and Fall of the Roman Empire for the entire human species...Pendell's Great Bay has been aptly described as 'wise, cunning, ecological fiction.'"
-Quantum Tantra

"[Dale Pendell] has some SF chops and can spin a yarn...from a SF/utopia perspective this book is a win; Pendell did everything that he set out to do here, and he did it well. From a political perspective? I can't imagine that it's anything other than a win there too, even if it is controversial."
-Omphalos' SF Book Reviews

"Pendell draws on a wild and wide-ranging knowledge of poetry, philosophy, history, and chemistry to bring us the world of The Great Bay. We should be so lucky to have such a guide— in a fictional or actual post-apocalyptic world."
-The Canary Review

Poet Dale Pendell was the author of the award-winning Pharmako trilogy, a literary history of psychoactive plants. His poetry is widely anthologized, most recently in The Wisdom Book of American Buddhist Poetry and The Baby Beats and the 2nd San Francisco Renaissance. Combining the teachings of poet Gary Snyder, Zen teacher Robert Aitken, and philosopher Norman O. Brown, he developed themes of "ancient wisdom/wild mind." Besides writing, Pendell was a consultant for herbal product development and botanical surveys as well as a computer scientist. He was the founding editor of Kuksu: Journal of Backcountry Writing and a cofounder of the Primitive Arts Institute. He died in 2018.
Loading...
or support indie stores by buying on