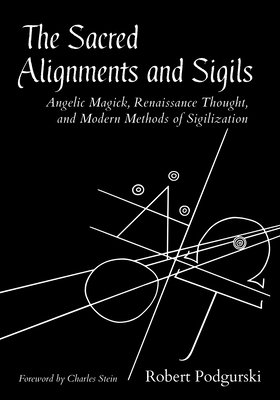 The Sacred Alignments and Sigils

A breakthrough in occult studies that combines modern sigil techniques with traditional Enochian Magick and appeals to all levels of ritual magick practitioners, explorers of consciousness, scholars, dowsers, and tantric yoga practitioners

Author and magick practitioner Robert Podgurski shares his discovery and development of the Grid Sigil--a tool for exploring the mysteries of embodiment and unity that bridges Enochian Magick with Sparean sigilization. Properly constructed, it emanates the root energies of the four elements bound by spirit in the space/time continuum. This text offers readers a variety of techniques for using the Grid Sigil and is an essential guidebook for understanding the connection between Enochian Magick, geomagnetism, shamanism, and other facets of Eastern and Western esotericism. Close attention is paid to critical metaphysical thought through in-depth analysis based in science, metaphysics, philosophical speculation, and illustrations.

Praise For The Sacred Alignments and Sigils: Angelic Magick, Renaissance Thought, and Modern Methods of Sigilization…

"Magick practitioner Podgurski (Wandering on Course) presents a deeply personal system of sigils and rituals discovered through years of practice in this thorough handbook...Drawing from the work of intellectuals and practitioners before him, such as Aleister Crowley, John Dee, and Carl Jung, Podgurski includes text and illustrations from both historic esoteric texts and the author’s own journals."
—Publishers Weekly


“As in Derek Jarman’s great film Jubilee, John Dee invents time travel and arrives in our century. Slyly he rewrites the Enochian Calls—and the result is this book.”
—Peter Lamborn Wilson, author of Cauda Pavonis: Esoteric Antinomianism in Yezidi Tradition

“The publication of Podgurski’s Grid Sigil in an accessible format should be welcomed both by practitioners and aficionados of ceremonial magic, and all fields of inquiry where the ontological status of nonhuman ‘persons’ quite generally is of concern.”
—From the foreword by Charles Stein, author of Persephone Unveiled

ROBERT PODGURSKI has been studying and practicing magick, qi gong, and yoga for over thirty years. He is engaged in a syncretic lifelong pursuit examining the history, practice and genesis of hermeticism, magick, alchemy, the Cabala, Tantra, and western esoteric studies. He regularly lectures and conducts workshops on Sigils, Occult theory and poetry. His essays have appeared in various journals such as The Fenris Wolf, Starfire, The Qliphothic Opus III, Abraxas, Cauda Pavonis, and The Italian Quarterly.
Loading...
or
Not Currently Available for Direct Purchase