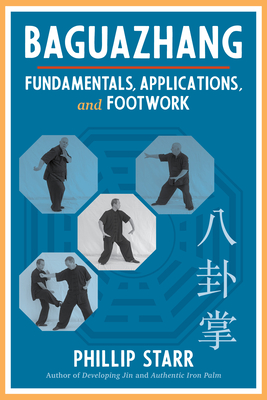 A comprehensive guide to the fundamentals, sequences, and applications of Baguazhang.

Baguazhang is unquestionably one of the most esoteric disciplines in martial arts. Based on the eight trigrams (bagua) of the Yi Jing, it emphasizes the importance of maneuverability, evasion, and change to deflect an aggressor's attacks. Unlike martial arts systems that employ overt punches, kicks, and grappling techniques, most of the bodily weapons of the baguazhang arsenal are well concealed, agile, and smooth. Utilizing deceptive forms of footwork and body shifting, the principles and techniques in this book will help readers develop a firm foundation and build a critical skill set for this unique martial art.

Longtime martial arts practitioner and author Phillip Starr introduces readers to the basics of baguazhang, showing how the movements of this widely misunderstood art can be practically applied in self-defense. Readers will learn:

“Useful, functional bagua training for real students who want to work. Straight-forward, reasonable presentation of authentic material by an experienced hand who has been around the block more than once. Highly recommended!”
—Robert Allen Pittman, master instructor of bagua and xingyi, author of Walking the I Ching, and coauthor of Chinese Internal Boxing and Bagua and Xingyi

“One of the things that makes Phillip Starr one of my favorite martial arts authors is that he can take even the most intricate actions and make them understandable. If you are interested in this fascinating art yet have backed off from studying it because of its complexity, you are in for a treat.”
—Professor Dan Anderson, 10th dan, world-famous martial arts champion and author of American Freestyle Karate and The Dan Anderson Encyclopedia of Modern Arnis

“...a clear and concise picture of the basic fundamentals necessary to practice Dong Haiquan’s baguazhang fundamental principles. [Starr] shows you how to use these concepts as both a health and practical martial art, something sorely lacking in today’s world of restrictive tournament forms.”
—John P. Painter, PHD, ND, Li family Jiulong Baguazhang USA representative

Phillip "Pete" Starr began his training in the martial arts in 1956, beginning with judo. Within a year, he received instruction in traditional kung fu in the basement of a small Chinese grocery store. He continued his training, also earning black-belt grades in two styles of Japanese karate (third dan in Kyokushin, first dan in Shito-ryu). His primary kung fu teacher was W. C. Chen, a direct disciple of one of China's best-known masters, Zhang Zhaodong. From Master Chen, Starr learned taijiquan (tai-chi chuan), xingyiquan, baguazhang, and a form of shaolinquan. He began teaching Chinese martial arts in 1967 at Parsons College in Fairfield, Iowa. After spending several years in law enforcement, he opened his first full-time martial arts school in Ottumwa, Iowa. He entered competition and earned the title of U.S. National Champion five times, the last time when he was sixty-three years old. He was named to the National Rules Committee of the United States Karate Association and became the kung fu chairman. Later, he was named to the list of the Rocky Mountain top ten competitors. Starr went on to train in Arnis, becoming a certified instructor under Tuhon Leo Gaje and Jeet Kune Do. From 1991–1995, Starr was the Chairman of the AAU (Amateur Athletics Union) Kung Fu division, which became the largest kung fu organization in the U.S. In 1991, Starr was inducted into Inside Kung Fu magazine's Hall of Fame.
Loading...
or support indie stores by buying on