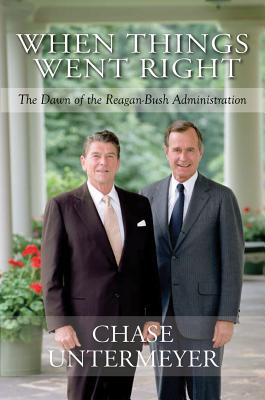 The Dawn of the Reagan-Bush Administration

When Things Went Right is a colorful and insightful portrait of Washington at the beginning of the Reagan-Bush era (November 1980–March 1983) as lived and recorded by an insider in his personal journal.

Chase Untermeyer was a Texas state legislator and former journalist when called to national service by his friend and mentor George H. W. Bush after the 1980 election. In his journal entries and subsequent annotations he describes how the Reagan Administration began to grapple with the major national and international challenges it inherited.

He also reveals specifically how then–Vice President Bush, Reagan’s former rival, became a valued participant in this effort, in the process solidifying the vice presidency as a significant position in modern American government.

As executive assistant to the Vice President, Untermeyer saw how Bush, Reagan, and their top associates began asserting conservative principles on domestic, political, and foreign affairs. He captured in his journal not just the events of each day but also the atmosphere, the key personalities, and the witty, trenchant, and revealing things they said.

The book’s long-lasting value will be in providing historians of the period with telling anecdotes and quotations that were caught and preserved with a reporter’s eye and ear. In addition to perceptive portraits of Reagan and Bush, When Things Went Right also features numerous cameo appearances by such diverse characters as Margaret Thatcher, Pope John Paul II, Emperor Hirohito of Japan, Clare Boothe Luce, and jazz great Lionel Hampton.

For those who look back on the presidencies of Reagan and Bush with nostalgia and respect, and also for those interested in the inner workings of the administration during its earliest days, this is the story of the time “when things went right.”

A diarist since the age of nine and later a professional journalist, Chase Untermeyer began his service in Washington in January 1981 as executive assistant to Vice Pres. Bush. Subsequently he was an Assistant Secretary of the Navy, a senior White House aide to Pres. George H. W. Bush, and director of the Voice of America. He would later serve Pres. George W. Bush as US ambassador to Qatar. Now an international business consultant, he lives in Houston.

Praise For When Things Went Right: The Dawn of the Reagan-Bush Administration…

"I would read anything Chase Untermeyer writes."--Peggy Noonan
— Peggy Noonan

“In recent years, historians have debated a critical question about George H.W. Bush: Was he the best one-term president in American history? There is one statement, however, that few can deny. He was the best vice president -- ever. Chase Untermeyer’s insightful and well-written book, When Things Went Right, chronicles the first two years that Bush served as vice president for President Ronald Reagan. As Bush’s executive assistant during that period, Untermeyer provides a bird’s eye view of the inner workings of the White House and of a man who worked hard and strove to be the very best that he could at everything he did.”--James A. Baker, III

"The result is a fine and important survey highly recommended for history and political science and collections alike." --James A. Cox
— James A. Cox

“It offers insights on quotidian affairs. Untermeyer observes with amusement how Reagan’s later proposal for a tax increase goes unnoticed by soi-disant conservatives today. But even though the book in its conclusion elides politics and policy, it leaves us with a useful lesson.”  — Political Science Quarterly
— Political Science Quarterly
or
Not Currently Available for Direct Purchase
Copyright © 2020 American Booksellers Association