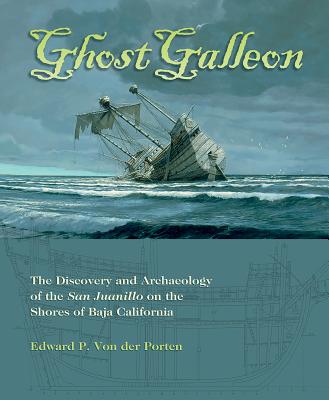 Ghost Galleon tells the story of archaeologists’ twenty-year search on a desolate beach in Baja California for the enigmatic remains of a Spanish galleon that disappeared without a trace more than four centuries ago. Carrying a cargo of Asian riches to the New World, Manila galleons forged the final link in the unification of the world through commerce by their annual voyages across the Pacific Ocean. Here, author Edward Von der Porten relates how a chance viewing of Chinese porcelain sherds in a museum catalog led him, his wife Saryl, and a team of researchers to the beachcombers who discovered the sherds. To Von der Porten, these sherds represented the possibility of something much more significant: one of the earliest known Manila galleon shipwrecks on the West Coast.

In collaboration with the National Institute of Anthropology and History of Mexico (INAH), Von der Porten and his colleagues undertook the first of many archaeological expeditions to investigate the site in 1999. Over twenty years, a team of American and Mexican archaeologists recovered thousands of artifacts and concluded that they had located the remains of the cargo from a Spanish galleon—most likely the San Juanillo of 1578.

This copiously illustrated, highly accessible work offers an inside view of how archaeologists carefully assemble the evidence that allows scientific reconstruction of past events. Despite the grudging resistance of time, Von der Porten and his colleagues have resurrected the tale of the ill-fated San Juanillo to enrich our understanding and appreciation of the past.