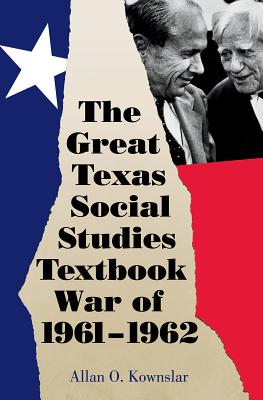 “The stressing of both sides of a controversy only confuses the young . . . . Until they are old enough to understand both sides of a question, they should be taught only the American side.”—J. Evetts Haley, 1962

“Censorship . . . is never to let people know but always keep them in ignorance. Never to enlighten but always to darken. It is easier to appeal to prejudice than to reason.”—J. Frank Dobie, 1962

Historian J. Evetts Haley and folklorist J. Frank Dobie, both legendary intellectuals in Texas letters, embodied the opposing and increasingly divergent views of a state and a nation mired in Cold War anxiety. After an unsuccessful bid for the governor’s office in 1956, Haley and other conservatives formed a political action group called Texans for America. One of their targets was public education and the textbooks that Texas children were reading.

As historian Allan O. Kownslar reveals, there had been other skirmishes over public school curriculum, but none reached the fervor of this one. Kownslar firmly places this controversy in the context of continued resistance to FDR’s New Deal, the election of President Kennedy, and the accelerating civil rights movement, showing how Texas became center stage for the drama surrounding control of what teachers could teach and students would learn.

Ultimately, the majority of state senators and representatives, Kownslar says, “seemed very weary of the whole textbook business and did not act.” There may have been little legislative action, but the die was cast for interest groups to use textbook adoption as a battleground for larger social issues, a phenomenon that persists to this day.

ALLAN O. KOWNSLAR is professor emeritus of history at Trinity University in San Antonio and a nationally recognized expert on social studies curriculum. He is the author of several books, including The European Texans. Kownslar resides in San Antonio.
or support indie stores by buying on
Copyright © 2020 American Booksellers Association