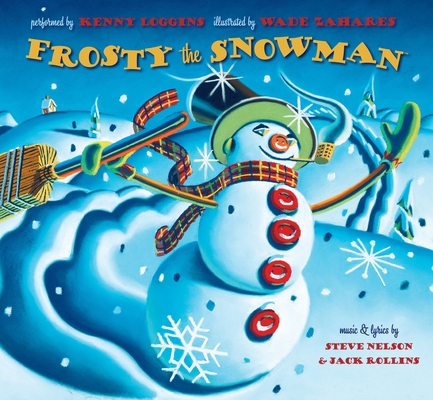 Children's favorite snowman is brought to life in this holiday classic that shines with the magic of winter. Kids will love to sing-along about Frosty's magic hat, button nose, and two eyes made out of coal. A unique offering of a book and CD recorded by Kenny Loggins, one of the most memorable of all wintertime songs gets an enchanting interpretation in this charming new picture book.

First recorded over sixty years ago, "Frosty the Snowman" became an instant holiday classic, winning children’s hearts and inspiring both an animated film and a long-running television special. Singers such as Gene Autry (the first), the Ronettes, Willie Nelson, and even the Chipmunks have recorded this simple-but-joyful winter tale.

Featuring spectacular art by Wade Zahares, whose WINDOW MUSIC was a New York Times Best Illustrated Book of the Year, and a CD, with the title song and two others—"Cyndi" and "Fishin Blues"—from Kenny Loggins, this sparkling picture book will captivate young readers. It’s the perfect gift for under the tree or a stocking—and wonderful for parents and children to share on a chilly winter’s night. Just pop in the CD, curl up under a blanket, look at the pictures with their bright holiday colors, and the story will work its wonder.

Singer-songwriter Kenny Loggins has sold over 25 million albums worldwide, twelve have gone platinum. He has won two Grammy® Awards for his singing and songwriting, and co-wrote the book, THE UNIMAGINABLE LIFE: LESSONS LEARNED ON THE PATH OF LOVE. His songs have been hits over the last four decades. Who can forget This is It, I’m Alright, Footloose, Danger Zone, Conviction of the Heart, and It’s About Time. In addition to his string of successful recordings, both solo and as a member of the famed duo, Loggins & Messina, Kenny became the first major rock star to dedicate himself to recording music for children and families. His album, Return to Pooh Corner, remains the best-selling children’s album of the last twenty years. Kenny, who reunited with Jim Messina in 2009, currently resides in Santa Barbara with his youngest children.
Loading...
or support indie stores by buying on