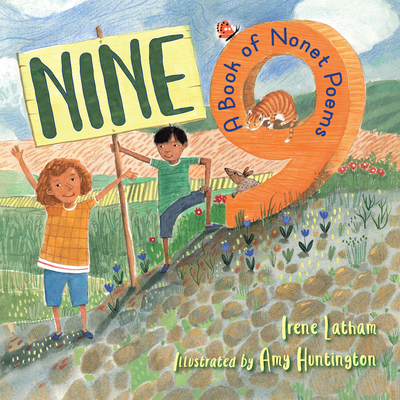 A Book of Nonet Poems

Fans of clever poetry and numbers rejoice! Nine is a book of nine-line poems called nonets, all about the number nine!

Hey!
Hi there!
Love nonets?
I'm sure you do.
What are they, you ask?
You don't know a nonet?
Not even one little one?
Actually, they're all the same size!
They're poems, of course--and here's your first!

Each poem in this clever collection is a nonet: a nine-line poem that starts with nine syllables in the first line and ends with one syllable in the ninth line (or the reverse). But these nonets go even further! Every one is also written with the number nine at its heart. There's plenty to love and learn: topics include the nine months it takes a baby to be born, cats' nine lives, baseball's nine players, and the nine-banded armadillo. Some feature history, such as the Little Rock Nine, the spacecraft Apollo 9, the ninth president; others explain idioms, like "dressed to the nines," "cloud nine," and "the whole nine yards." Explore these and more with nonets galore!

Praise For Nine: A Book of Nonet Poems…

Hail the divine number nine!
Nine shines in this nonet anthology. A nonet is a nine-line poem about any subject and may rhyme but doesn’t have to. Heeding the syllables in a nonet’s lines is vital: The first line contains one syllable; each line thereafter adds one more in turn until the ninth line contains nine. However, this pattern can be reversed, and the offerings here reflect both counting schemes. Each nonet focuses on the number nine itself. “Before You Were Born” honors human gestation; “Nine Lives” salutes cats; “Play Ball!” refers to a baseball’s team’s nine players and the game’s nine innings. A few poems provide information: “The Little Rock Nine” nods to the landmark 1957 Arkansas school-integration effort; “Nonagon” introduces the nine-sided geometric shape; “Beethoven’s Ninth” highlights the composer’s last symphony. The anthology concludes with “The Whole Nine Yards,” a reminder that nine is the last one-digit numeral. As with many anthologies, the poems’ quality varies, though overall, they’re jaunty and read well. While most verses admirably demonstrate how cleverly poems can develop from strict adherence to form, some verses seem contrived in service to that principle. Colorful, lively Illustrations depict a robustly diverse ensemble cast. Interesting backmatter adds an additional gloss on each poem and further celebrates the number nine.
Children may wish to compose nonets after delving into this unusual, entertaining collection.
—Kirkus Reviews

This colorful picture book of nonets (not to be confused with sonnets) features poems that incorporate the number nine. The lesser-known form of poetry is defined as “a nine-line poem in which the first line contains nine syllables; the next line, eight syllables; and so on until the last line has one syllable, or the reverse, with one syllable in the first line and nine in the last.” The poems spotlight baseball games, circuses, armadillos, and planets. The cadence of each poem and the familiarity of the topics make the title perfect as an introduction to poetry in the classroom. Huntington’s colorful watercolor illustrations illuminate the poems’ imagery and ground the words in reality. Huntington’s swirls of color and Latham’s words paint pictures that can be used across the curriculum and various disciplines. VERDICT This poetry collection can be a fun, alternative way of learning while building vocabulary and literary understanding. A good addition to a classroom library for elementary students.
—School Library Journal

In this title, dedicated to nonets—nine-line poems in which the first line has one syllable and each line adds a syllable, culminating in a final line with nine (or beginning with nine and ending with one)—clever poems show how much the number nine surrounds us in our everyday lives. Cats with nine lives run home to rest; children gather to play nine innings of baseball; a museum contains facts about the Little Rock Nine; and Pluto dreams of becoming the ninth planet again. Lively scenes illustrated with warm colors depict kind, friendly siblings, friends, classmates, and adults learning and sharing special moments together. Words in each poem have been carefully chosen by Latham to share not only facts but also humor and dreams, asking readers to imagine. A fun book of warm scenes and clever lines that will invite youngsters to revisit this world over and over again. You won’t be able to look at the numeral nine again without seeing its big smile.
—Booklist

A nonet, as the first poem explains, is a "Grand / poem / with nine lines / one-syllable / first line builds toward / nine-syllable ninth lnie / or the reverse). A staircase / for poets and readers alike! / (Any subject, rhyming optional.)"  Latham's nonets focus on a wide range of subjects, each related ot the number nine—Apollo 9, the Little Rock Nine, being "dressed to the nines"—while loose-lined illustrations in watercolor, gouache, and colored pencil show a diverse cast of kids engaging with each topic. Detail-oriented readers whould find fun in counting syllables, and the language is well-chosen for read-alouds (in a poem about highttime baseball: "Nine players like dancers / on a stage lit by starshine"), though there's a forced line here and there. A closing note gives more information about the poem topics, the word nonet, and, of course, the number nine.
—The Horn Book

Irene Latham is the author of more than a dozen books, including two novels for children: Leaving Gee's Bend and Don't Feed the Boy. Winner of the 2016 ILA Lee Bennett Hopkins Promising Poet Award, her poetry books for children include Dear Wandering Wildebeest, When the Sun Shines on Antarctica, Fresh Delicious, and Can I Touch Your Hair? (co-written with Charles Waters). Irene lives near Birmingham, Alabama.