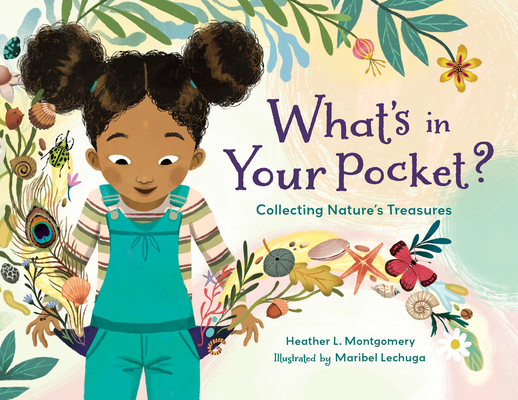 What's in Your Pocket?

When you find something strange and wonderful, do you put it in your pocket? Meet nine scientists who, as kids, explored the great outdoors and collected "treasures": seedpods, fossils, worms, and more. Observing, sorting, and classifying their finds taught these kids scientific skills--and sometimes led to groundbreaking discoveries. Author Heather Montgomery has all the science flair of a new Bill Nye. Book includes the Heather's tips for responsible collecting.

Praise For What's in Your Pocket?: Collecting Nature's Treasures…

♦ If you’re a child who collects nature’s treasures, you’re in good company.
This cleverly conceived and appealingly executed title addresses young readers directly, connecting their noticing and collecting habits to those of others who continued to observe, collect, and organize in adulthood. Montgomery introduces a grandly diverse array of nine naturalists, researchers, and explorers from Maria Sibylla Merian, who studied butterflies in the 17th century, to Bonnie Lei, whose present-day research focuses on sea-life conservation. Three are people of color, and the majority are female. The young George Washington Carver collected seed pods; deep-sea explorer William Beebe collected birds’ eggs; and young Jane Goodall put worms under her pillow! Other profiles include Charles Darwin, tree-canopy explorer Margaret Lowman, herpetologist Diego Cisneros-Heredia, and fossil hunter Mary Anning. The vignettes from childhood are engaging, well paced, and smoothly told. Short introductions to the adult scientists follow, in a smaller font. In her author’s note, the writer introduces the concept of naturalist intelligence. Lechuga’s friendly illustrations feature the brown-skinned girl with Afro puffs and overflowing pockets shown on the cover as well as the scientists as children, then as adults, in appropriate times and places. The backmatter includes more about the grown-up scientists and the author’s own sensible “rules for collecting,” which involve respect for nature, the people she lives with, and herself (safety). The illustrator reminds readers that habits of observation are something she also shares with scientists.
Inspiration for nature-loving children.
—Kirkus Reviews, starred review

♦ Who hasn’t wandered a beach or forest and tucked a sparkling stone or bit of flora into their pocket? Montgomery’s terrific picture book suggests that this kind of casual curiosity can spark a lifelong love of science and nature. A series of humorous anecdotes give brief introductions to the extraordinary lives of nine scientists, plus scientific tidbits. The stories have delightfully surprising outcomes, as a worm-loving kiddo grows into primatologist Jane Goodall, and a burgeoning bug collector turns out to be Charles Darwin. Plenty of lesser-known names are included, too, from different time periods and varied backgrounds: in the seventeenth century, Maria Sibylla Merian discovers that butterflies grow from caterpillars, while a modern-day Bonnie Lei continues work on sea animals. In Lechuga’s appealing illustrations, which vividly capture the wonder of childhood explorations and the beauty of the natural world, kids poke around in tide pools, spy on slugs, and stuff their pockets full of seeds. It’s an altogether charming concept, convincingly demonstrating how childhood enthusiasms can be much more than passing fancies. Helpful back matter expands on each featured scientist and suggests additional reading, recommends field guides, and offers important guidelines for responsible collecting in the wild. Sure to inspire children—and their grown-ups—to get outside and respectfully delight in the incredible world around them.
—Booklist, starred review

Heather L. Montgomery is passionate about nature, discovery, and the scientific process. An author and master teacher, she uses curiosity and yuck-appeal to engage young minds. Her many science books include Bugs Don't Hug: Six-Legged Parents and Their Kids and Something Rotten: A Fresh Look at Roadkill. Heather has a BS in biology and an MS in environmental education. When she's not writing, she can be found climbing a tree, wading knee-deep in a creek, or collecting natural treasures with kids in beautiful Alabama.

As a child, Maribel Lechuga spent every quiet hour of the day drawing. She studied illustration in art school in Madrid and is now the illustrator of many children's books, including Ten Beautiful Things and Seaside Stroll. Maribel loves the environment and animals and recharges her batteries by hiking through the Spanish hills. www.maribellechuga.com
Loading...
or support indie stores by buying on