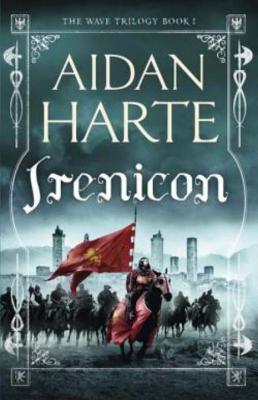 Book 1 of the Wave Trilogy

"If there were stars for world-building, Irenicon would be a five plus, no question" --SFX

"The book is a fountain of gorgeous detail, festooned with enriching codices and enlightening, subtly subsumed exposition" --Sci-Fi Now

The river Irenicon is a feat of ancient Concordian engineering. Blasted through the middle of Rasenna in 1347, using Wave technology, it divided the only city strong enough to defeat the Concordian Empire.
But no one could have predicted the river would become sentient--and hostile. Sofia Scaligeri, the soon-to-be Contessa of Rasenna, has inherited a city tearing itself apart from the inside. And try as she might, she can see no way of stopping the culture of vendetta that has the city in its grasp.
Until a Concordian engineer arrives to build a bridge over the Irenicon, clarifying everything: the feuding factions of Rasenna can either continue to fight each other or they can unite against their shared enemy. And they will surely need to stand together--for Concord is about to unleash the Wave again.

Praise For Irenicon: Book 1 of the Wave Trilogy…

"Add some time-controlling kung fu nuns, a terrible prison of dark waters and lightning, and a young kickass Contessa, and you've got a pretty good time on your hands."—Geek Smash

"An excellent piece of world-building by someone with a real feel for renaissance Italy... To sum up, Harte is a brilliant new voice in historical fantasy, and this is quite simply the best piece of fantasy that I have read so far this year."—Lawrence Osborne, Interzone

"Harte's use of descriptive language is absolutely haunting. I didn't think anyone could write chapters and chapters about building a bridge and make it sound epic, perilous, and romantic. He can literally make a tree stump sound inviting."—Fanboy Comics

"This leaves me seriously impressed both by the quality of the ideas and the ingenuity with which they are explored in the text.... Irenicon is completely fascinating, leaving us poised on a wholly unexpected note as a new temporary balance in the power structures is achieved."—David Marshall, Thinking About Books

"Irenicon is a fantastical mash up of traditional fantasy and elements of steampunk and military histories. The story sucks you in immediately, and then hauls you along for the ride while Harte weaves a tale that's engrossing and fulfilling... The world that Harte has created here is full and rich with amazing detail of martial styles and the emergence of the worlds engineers. You can almost feel the world teetering on the precipice between the older hand-to-hand combat styles and the new combat styles devised by the engineers."—Novelnaut

"The book is a fountain of gorgeous detail, festooned with enriching codices and enlightening, subtly subsumed exposition. Well written and conceived, we look forward to Harte's future works with relish."—Sci-Fi Now

"If there were stars for world-building, Irenicon would be a five-plus, no question. Harte brings a level of intelligence to the book that's impressive."—Jon Courtnay Grimwood, SFX

Aidan Harte was born in Kilkenny, studied sculpture at the Florence Academy of Art, and currently works as a sculptor in Dublin. He has also worked in animation and TV, and in 2006 created the show Skunk Fu, which has appeared on several channels around the world, including the Cartoon Channel.
Loading...
or
Not Currently Available for Direct Purchase