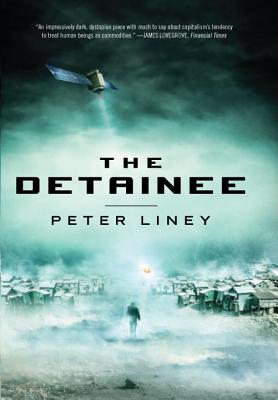 Peter Liney honed his strong narrative skills and attention to detail during his long career as a writer of German, Australian, British, and South African television and radio programs. In his debut novel, The Detainee, Liney has created a dystopian world in which the state has gone bust and can no longer support its weakest members.

The Island is a place of hopelessness. The Island is death. And it is to this place that all the elderly and infirm are shipped, the scapegoats for the collapse of society. There's no escape, not from the punishment satellites that deliver instant judgment for any crime--including escape attempts--and not from the demons that come on foggy nights, when the satellites are all but blind. But when one of the Island's inhabitants, the aging "Big Guy" Clancy, finds a network of tunnels beneath the waste, there is suddenly hope--for love, for escape, and for the chance to fight back.

"if you want to read a novel with a dystopian look at ageism, an examination of an extreme example of a police state, and a dose of The Lord of the Flies blended into a unique vision of the future, this may be exactly what you've been looking for. Liney's characters and world manage to get under the reader's skin even when the exact details are a little off-putting."—FanBoy Comics

The book I'm most excited about this spring, and therefore my selection for the Big Spring Books Editors' Picks, is The Detainee, the debut novel by British author Peter Liney. From the moment I read the book's description months ago, I was antsy to get my hands on this one. And once I read the first page, I didn't put it down until I'd turned the last--literally.—Robin Greene, Amazon Editor

"The story takes you by surprise and never lets up."—Amy Phelps, Parkersberg News and Sentinel

"I always enjoy finding a good surprise read, especially debut novels. I've just finished The Detainee by Peter Liney, and I'm already anxious to read the next book in the series. If I had to place its theme and concept, it'd be a mix of Logan's Run with Lord of the Flies... with a hint of Battle Royale' s oppressiveness."—GeekDad

Peter Liney was born in Wiltshire but has spent a large part of his life overseas indulging in such diverse occupations as sewing-machine salesman, actor/model and stuntman--to name but a few. He has written sitcoms for ABC and Channel 4, and drama for the BBC and South African radio. The Detainee is his debut novel. He lives in London.
Loading...
or
Not Currently Available for Direct Purchase