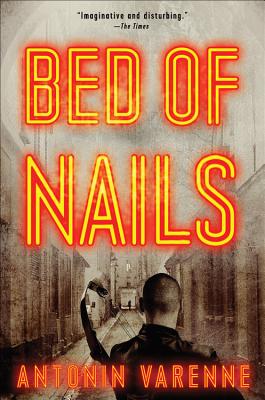 Winner of the Prix Quai du Polar, Antoin Varenne is a rising star in the exciting new wave of French crime fiction. Hard-boiled Paris police lieutenant Richard Guerin thought he knew the depths of human tragedy and perversion during his years investigating suicide cases--not to mention his childhood, raised by his prostitute mother (who left him nothing but her foul-mouthed parrot).

But when a slew of cases that are way too bizarre to be straightforward suicides end up on his desk, Guerin begins to suspect that he is up against a nihilistic evil beyond anything he's encountered before.

First, there is Alan Musgrave, an American man who bleeds himself to death on stage during a sick S&M show in an underground Paris nightclub. Another runs naked into traffic with arms outstretched and is splattered to pulp by a heavy truck. Yet another hurls himself from a museum balcony to death by impalement on a whale skeleton.

Guerin's corrupt police colleagues ridicule his determination to find the connections between these horrifying deaths. Yet he presses on, plunging into the seamy sadomasochistic underbelly of the City of Lights that most never see.

Unexpected help comes from a friend of Musgrave's, an eccentric and resourceful rich American named John Nichols who has recently arrived in Paris toting a bow and arrows. The bloody trail leads them to the upper reaches of both the Parisian police force and the American embassy, while Guerin begins to suspect that the ultimate answer may lie somewhere in Nichols's past.

In Bed of Nails, Varenne does for Paris what James Ellroy did for vintage Los Angeles: He expertly throws a bright light on a fashionable city's hideous hidden face.

Praise For Bed of Nails…

"A powerful and original debut crime story, definitely one for Vargas fans to try, and I very much hope that there is more Varenne crime fiction to come. I will be waiting, with bated breath, my hands over my eyes and peeking through my fingers, as I watch his next story unfold."—Lynn Harvey, Euro Crime

"This book excels in its characterization and depiction of human relationships and it is worth reading for these elements alone."—Crimepieces

"Superb... The novel has a strikingly original plot and characters, and its pessimism is balanced by Varenne's inexhaustible human sympathy."—Joan Smith, The Sunday Times

"Imaginative and disturbing"Marcel Berlins, The Times—


"Bed of Nails engages with the violence at the heart of society, and the darkest elements of human nature."—Fantastic Fiction

"An excursion into Fred Vargas territory... an intriguing read, with a bold and surprisingly moving ending."—Laura Wilson, The Guardian

ABOUT THE AUTHOR:
Antonin Varenne has travelled a great deal and completed an MA in philosophy before embarking on a career as a writer. Bed of Nails is the first of a new series of crime novels set in the Paris underworld.

ABOUT THE TRANSLATOR:
Sian Reynolds is the translator of Fernand Braudel, and of CWA award-winning crime novels by Fred Vargas.
Loading...
or
Not Currently Available for Direct Purchase