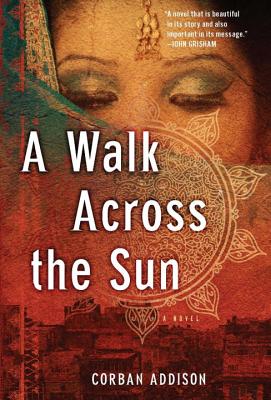 A Walk Across the Sun (Paperback)

Corban Addison's debut novel, A Walk Across the Sun, made waves when it was first published, called "pulse-revving with a serious message," by O, the Oprah magazine. John Grisham said, "Addison has written a novel that is beautiful in its story and also important in its message. A Walk Across The Sun deserves a wide audience." A trained lawyer committed to the cause of advancing international human rights and abolishing modern slavery, Addison has written a novel that enlightens while it entertains; A Walk Across the Sun brings together three of Addison's great passions--storytelling, human rights, and the world's many cultures.

Ahalya Ghai and her younger sister Sita are as close as sisters can be. But when a tsunami rips through their coastal village, their home is swept away, and the sisters are the sole survivors of their family. Destitute, their only hope is to find refuge at a convent many miles away. A driver agrees to take them. But the moment they get into that car their fate is sealed. The two sisters--confused, alone, totally reliant on each other--are sold.

On the other side of the world, Washington lawyer Thomas Clarke is struggling to cope after the death of his baby daughter and the collapse of his marriage. He takes a sabbatical from his high-pressure job and accepts a position with the Bombay branch of an international anti-trafficking group. Thomas is now on a desperate path to try and save not only himself and his marriage, but also the lives of the two sisters.

Corban Addison is the author of the international bestselling novels, A Walk Across the Sun and The Garden of Burning Sand, which address international human rights issues within the framework of deeply researched and compelling human stories. An attorney, activist, and world traveler, he is a supporter of numerous humanitarian causes, including the abolition of modern slavery, gender-based violence, and HIV/AIDS. He lives with his wife and children in Virginia.

Praise For A Walk Across the Sun…

"A novel that is beautiful in its story and important in its message. A Walk Across the Sun deserves a wide audience."—John Grisham