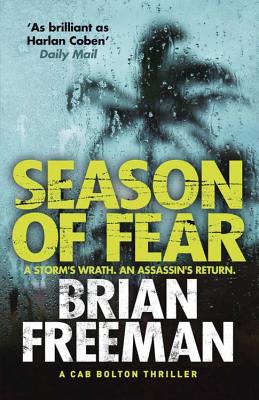 "A HURRICANE-FORCE THRILLER." --PETERBOROUGH TELEGRAPH
"IT WILL BLOW YOU AWAY." --LINDA CASTILLO, NYT-BESTSELLING AUTHOR
"ANOTHER SMASH HIT BY FREEMAN!" --FIVE-STAR READER REVIEW
#1 bestselling author Brian Freeman returns to the sun-drenched beaches of Naples, Florida, and the idiosyncratic world of Detective Cab Bolton in this "brilliant" and "chilling" story of political intrigue and murderous revenge that will keep you guessing until the very end.
Attractive and popular politician Diane Fairmont is running for the Florida governorship, but a chill is cast over the campaign when she receives an anonymous note announcing the return of the assassin who killed her husband ten years earlier.
As Bolton struggles to penetrate the veil of secrecy surrounding the Fairmont campaign, he begins to realize that the death threat is not the only danger faced by the campaign staff. A desperate race against the clock ensues as Bolton tries to unlock the secrets of a poisonous conspiracy before nature provides the perfect cover for a long-dormant killer to strike again.

A native of Chicago and longtime resident of the Twin Cities, Brian Freeman is an international bestselling author of psychological suspense novels. His books have been sold in 46 countries and 20 languages and have appeared as Main Selections in the Literary Guild and the Book of the Month Club. He is the author of The Cold Nowhere, a finalist for the 2014 Minnesota Book Award, and Spilled Blood, which won the 2013 International Thriller Writers' Thriller Award for Best Hardcover Novel. The Burying Place was a finalist for the 2011 Thriller Award. Also in 2011, The Bone House was a finalist for Best Audiobook of the Year in Thriller/Suspense as well as the Minnesota Book Award. Brian's debut thriller, Immoral, won the Macavity Award and was a nominee for the Edgar, Dagger, Anthony, and Barry awards for best first novel.

Praise For Season of Fear (A Cab Bolton Thriller #2)…

"Season of Fear has everything: unexpected plot twists that keep on coming, a smart and charming hero, and a setting that's as sultry and dangerous as a tropical storm. It will blow you away."
—Linda Castillo, New York Times-bestselling author

"A hurricane-force thriller . . . More twists and turns than a tornado."
—Peterborough Telegraph

"Right-wing extremists, drug dealers, and political opponents are all credible potential culprits . . . A taut thriller that's at once a whodunit and a who-will-do-it."—Publishers Weekly

"Masterfully developed . . . You can almost feel the intensity of the tropical storm . . . An edge-of-the-seat, nail-biting reading experience with an exhilarating conclusion."—Fresh Fiction

"Fans of Freeman, whether in Duluth, across Minn­esota, or around the world, have come to appreciate his vivid descriptions, brisk action, relatable characters, and page-turning prose . . . Season of Fear establishes new stars in Bolton and Piper and a new storyline that will leave readers eager to devour more.—Chuck Frederick, The Duluth News Tribune

"A highly entertaining mystery about personal legacies and the politics of privilege . . . I'm thrilled to have Cab back between the covers of a book."—The Minneapolis Star Tribune

"Season of Fear kicks into high gear as it combines the police procedural with the political thriller, never neglecting the tenets of each while exploring the best of both categories of mystery fiction . . . Freeman enthusiastically delves into the machinations of Florida politics with realistic behind-the-scenes details. The tightly coiled plot erupts in several directions, each plausible and believable to anyone the least bit familiar with Florida politics."—Florida Sun Sentinel

"Politics is a deadly business in the Sunshine State . . . In a story teeming with characters, someone from one party figures that murder makes a winning campaign strategy. Freeman does an expert job conducting the traffic and keeping the thrills within the bounds of believability."—The Toronto Star

"Freeman is an excellent purveyor of psychological suspense . . . [He] expertly links the back stories of the Bones and the Bradleys and keeps the suspense at fever pitch."—The Daily Mail on The Bone House

"Scorching suspense . . . In this book, [Freeman] has surpassed himself."—The Star Tribune on The Bone House

"Here's a psychological thriller done by someone who knows how to write one. While basically a story of a man and wife, the plot bleeds out to include a detective and and CSI analyst, some troubled teenagers, and a terrible tragedy from the past. The tragedy, portrayed in the breathtaking prologue, reaches lethal tentacles into the future and threatens almost everyone involved."—Suspense Magazine on The Bone House
or
Not Currently Available for Direct Purchase
Copyright © 2020 American Booksellers Association