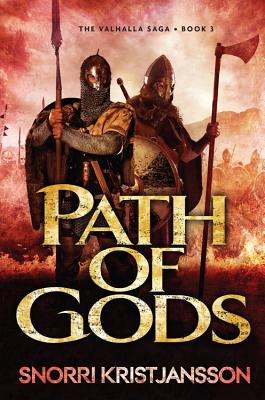 Path of Gods (The Valhalla Saga #3)

In this raucous fantasy epic set at during the era when the Vikings fearlessly sailed the world's seas, mead flowed freely, and Gods walked the earth, companions Audun Arngrimsson and Ulfar Thormodsson are reunited after separate journeys of self-discovery.
In Trondheim, King Olav, self-appointed champion of the White Christ, grows restless in the wake of a significant victory and finds his faith tested further as he struggles to maintain the peace. With his garrison decimated and his forces surrounded by deceitful, grasping local chieftains, the King contemplates how best and where to spread the word of his God.
Reunited after their quests to discover the contours of their newfound immortality, Audun and Ulfar have a new sense of purpose: to ensure that the North remains in the hands of those who keep to the old ways of Odin, Thor, and Loki. To do so, they must take on a powerful adversary who will stop at nothing to put an end to age-old traditions in the name of the White Christ. Audun and Ulfar are about to do battle with the most powerful enemy they have ever faced, and if they are to have any chance of victory, they must find equally powerful allies.
Meanwhile in the North, touched by the trickster god, something old, malevolent, and very, very angry stirs . . .

Praise For Path of Gods (The Valhalla Saga #3)…

"I'm impressed! ... An excellent foray into historical Scandinavian fiction ... and I highly recommend it to anyone interested in Vikings, ancient battles, or religious conflicts. I definitely will look forward to later installments in The Valhalla Saga to continue the story."—Fanboy Comics, on The Swords of Good Men

"[It] promises to be a powerful epic fantasy series... Kristjansson takes the reader along at a breakneck speed, and it doesn't let up until the final very end. And the ending, though satisfying, leaves the door open for yet more mayhem."—Historical Novel Society, on The Swords of Good Men

"A frenetically fast fantasy novel ... which due to its originality easily rises above the crowd."—Upcoming4me, on Blood Will Follow

"Kristjansson delivers another gripping read, proving he knows how to weave a tale that will enthrall his readers."—A Fantastical Librarian, on Blood Will Follow

"An almost unforgettable Viking saga set in a world that is more real,
textured and layered than expected, peppered with characters that will
make you laugh, and feel strongly."—Bookworm Blues

Snorri Kristjansson is an Icelander, a writer and a teacher, with a background in acting, music and stand-up comedy. He lives in South London with his fiance.
Loading...
or
Not Currently Available for Direct Purchase