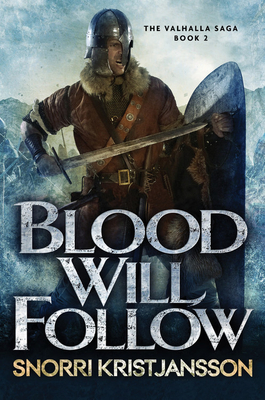 Starburst magazine called Snorri Kristjansson's Swords of Good Men--the first volume in the Valhalla Saga--"A cracking yarn (one that would make a great movie), filled with enough to satisfy any fan of Vikings and their mythology." Now this raucous and gripping fantasy adventure set in Viking Norway continues with Blood Will Follow, where plundering and pillaging are a way of life and creature comforts rarely exceed a mug of sour mead.
Ulfar Thormodsson and Audun Arngrimsson are battered, having barely survived the battle for Stenvik, waged between King Olav and the followers of the White Christ, and those whose allegiance remains to the gods of the Norse pantheon. Alas, the two Vikings' encounter with a mysterious witch just before escaping the town over the city's walls have left them without the one thing that made them human: their mortality.
While Ulfar heads home to Sweden, hoping to find a safe haven where he can come to grips with his newfound inability to die, Audun travels by foot to the south, searching for answers on the open road. But both men are about to discover that they cannot run from their destiny. King Olav has left the conquered town of Stenvik in the hands of his lieutenant so he can journey north, following the advice of the scheming healer Valgard, to hunt for the source of the Vikings' power.
Soon, Ulfar and Audun will realize they have important roles to play in the battle for supremacy between those seeking to spread the gospel of the White Christ and those who keep to the old ways of Odin, Thor, and Loki.

Snorri Kristjansson is an Icelander, a writer and a teacher, with a background in acting, music and stand-up comedy. He lives in South London.
Loading...
or
Not Currently Available for Direct Purchase