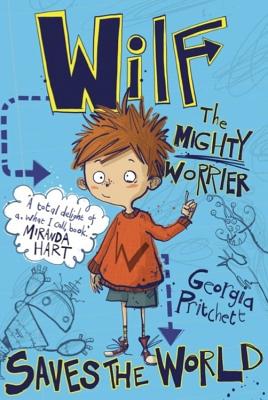 Wilf worries quite a lot. About quite a lot of things. Well, if we're being totally honest, he worries about almost everything. Stuffed animals for instance. And peanut butter makes him nervous, too. And, as for those awful insects that have waggly feeler thingies instead of eyes? Well, they're something he can't even bear to think about.
So, when the most evil man in the world (named Alan) moves in next door one day, Wilf is understandably rather alarmed. Especially after he learns that Alan is a self-styled Evil Lunatic, with his own grumpy robot sidekick to complete the package. Wilf's only ally in his desperate struggle to put a stop to Alan's plan to destroy the world is his sticky little sister, Dot. Can Wilf stop worrying for long enough to save the world?

Georgia Pritchett is a comedy writer who has written for a number of TV comedies and comedians including The Thick Of It, Veep, Miranda, Have I Got News For You, Smack the Pony, Graham Norton, Jo Brand, Paul Merton, Lenny Henry, Ronnie Corbett, Wallace and Gromit, and several other real, fictional, and occasionally plasticine people. Wilf the Mighty Worrier is Georgia's first book for children. She lives in London with her partner and two children.

Praise For Wilf The Mighty Worrier: Saves the World…

"A total delight of, what I call, a book!"
—Miranda Hart


"Wilf The Mighty Worrier could not be more charming or hilarious and I'm not just saying that because I'm a worrier myself who comes from a long line of worriers and wow, I really wish this sentence was shorter. I am saying that because it's true. Georgia Pritchett is a marvelous writer who has written a marvelous book. Period."—Julia Louis-Dreyfus

"This book is worryingly good. A funny, original and inventive story that children and adults will love."—Tracey Ullman
or
Not Currently Available for Direct Purchase
Copyright © 2020 American Booksellers Association