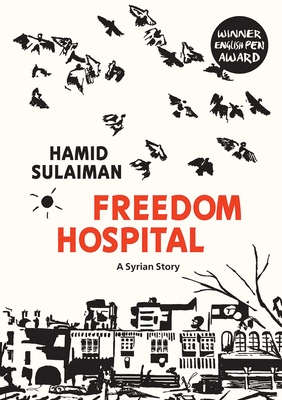 JOE SACCO MEETS PERSEPOLIS IN THIS GRAPHIC NOVEL FROM A NEW INTERNATIONAL TALENT, HAMID SULAIMAN--WINNER ENGLISH PEN AWARD­--It is spring 2012 and 40,000 people have died since the start of the Syrian Arab Spring. In the wake of this, Yasmine has set up a clandestine hospital in the north of the country. Her town is controlled by Assad’s brutal regime, but is relatively stable. However, as the months pass, the situation becomes increasingly complex and violent. Told in stark, beautiful black-and-white imagery, Freedom Hospital illuminates a complicated situation with gut-wrenching detail and very dark humor. The story of Syria is one of the most devastating narratives of our age and Freedom Hospital is an important and timely book from a new international talent.

"With the intimacy of a person who has lived the tragedy himself but with the restraint of a true artist, Hamid Sulaiman tells a powerful tale of Syria's descent into cataclysm while reminding us of those still tending the seeds of the revolutionary spring."
--Joe Sacco

"If you want insight into the complex situation in Syria, read this book. It provides a stark vision of life in a war zone but, like Freedom Hospital itself, it never loses hope."
--Mary Talbot

"Hamid Sulaiman's shocking inside story of an ongoing people's revolution against one of the world's most brutal regimes is eye-opening, explosive and utterly necessary. The chiaroscuro-heavy artwork, more dark than light, seems drawn in Sulaiman's heart's blood."
--Neel Mukherjee

"This eye-opening graphic novel is a powerful and moving introduction to the realities of the war in Syria. Sulaiman s stark black and white artwork brilliantly conveys the moral, political, and emotional shades of gray rarely shown on the news."
--Stephen Collins

Syria's ongoing civil war began as mostly peaceful people's protests against Bashar alAssad's repressive regime. But when Assad responded with violence, the opposition expanded to include armed revolutionaries plus groups of radical Islamists, some with Daesh/ISIS affiliation. Sulaiman, who fled Syria in 2011, based this fictionalized account on actual events. It's 2012, and pharmacist Yasmin runs a clandestine hospital near the Turkish border, treating the wounded without taking sides. Around her the chaos intensifies and more people die, combatants and civilians alike. Front-matter profiles introduce the characters: clinicians, patients, and locals of all factions, each with allegiances and betrayals. Sulaiman works in stark, expressionist black and white, his images like glimpses lit by explosions seen while running. In some panels, text blocks identify weaponry as "made in Russia" or "made in the U.S., " indicating outside support for the various parties in the struggle. VERDICT This devastating, intimate view of a complex international tragedy bypasses easy labeling to empathize with all participants as victims. An English PEN's Writers in Translation grantee and a compelling read for book groups and concerned Anglophones."

Syrian cartoonist Sulaiman's debut novel follows the desperate lives, noble struggles, and violent deaths of people tied to an underground hospital during the Syrian civil war. The book opens with a dozen headshots and short biographies of characters, including Yasmin, the young woman who founded the eponymous hospital to help the rebels battling the Syrian government and to fulfill her father's dream of opening a hospital, which had been thwarted by bureaucracy and corruption; Abu Taysir, a militia leader and former political prisoner in his 60s navigating the web of factions engaged in the conflict, including the nascent Islamic State; the Colonel, a merciless commander in the Syrian army; Haval, a philosophical army deserter who hangs around the hospital to be near his girlfriend, Zahabiah, a refugee who works as the cook; and Salem, a patient whose head wound has dashed his memory, leaving him unsure which side he is on. A through line involves Yasmin's childhood friend Sophie, a French journalist Yasmin helps to sneak back into Syria to document the war, but the book ranges far and wide, giving each character at least one solid beat to dramatize the situation's complexity while also including omniscient sequences crafted from news footage and YouTube videos and even a brief, psychedelic aside into the historical roots of the Shiite-Sunni divide. The art's flat blacks, stark whites, and heavy lines give the work an almost impressionistic feel, bringing to the real-world images a rotoscoped look and simplifying both fact and fiction to touchstones (furrowed brows, falling tears, spattered blood). This notion also encapsulates the work overall-expressive and representative but not necessarily deep or rounded. As Sulaiman says in his postscript, the conflict is too complex to be fully captured; nevertheless, here is a striking look. A heartbreaking and eye-opening primer to the quagmire of a generation.

This graphic-novel debut by an eyewitness to the early days of the Syrian civil war centers on the staff and patients at an underground hospital treating victims of the Assad regime. Initially, the idealistic supporters of the Arab Spring are confident that Assad's downfall is imminent. But over the months, the situation deteriorates as the bombings grow more and more devastating. The myriad armed opposition groups adopt increasingly brutal tactics, and the Islamic extremist factions become an even more immediate threat to the hospital workers than the army. Sulaiman, who fled Syria in 2011, witnessed the torture and murder of many friends. Although fictional, the story, based on his own experiences, evokes the urgent graphic journalism of Joe Sacco and Sarah Glidden. The heavily inked, high-contrast black-and-white drawings, occasionally incorporating inked-over images from YouTube, produce a dramatic effect that sometimes sacrifices clarity for the sake of impact. Sulaiman's heartfelt work puts a harrowingly human face to the relentless headlines and news footage of the still-ongoing conflict.

Urgent, cogent and compelling... Freedom Hospital is genuinely shocking at times, but Francesca Barrie's impressive translation also finds the black humor that tends to have a natural home in graphic novels... Yes, Freedom Hospital is a must-read, but its tone, mood and form somehow make it as entertaining as it is informative and thought-provoking. A graphic novel might just be 'the' piece of creative writing to come out of the horrifying mess that is Syria in the 2010s.

Heartbreaking and funny, tender and troubling; this is a vital piece of art about the great humanitarian tragedy of our age.
— Andrew McMillan

Sulaiman's stripped back black and white art reminded this reader of both the work of Marjane Satrapi but also more broadly 2000AD (this must be in the future, your mind shrieks, it can't possibly be happening now, on the same planet I'm on)... as a piece of work it's to be applauded... a story that deserves to be read.

Hamid Sulaiman is a Syrian refugee currently based in Paris. He was heavily involved in the Arab spring and spent time in prison, but managed to escape to Egypt before making his way to France. Freedom Hospital was published in France to wide acclaim. Hamid has exhibited his art in London where he was interviewed by the Guardian: “The brutal crackdown on Assad's opponents dominates the paintings of Hamid Sulaiman, from the town of Zabadani near the Lebanese border, who fled abroad in 2011 after being arrested several times for taking part in peaceful protests. On one canvas, Light after Dark (2012), abstract flesh-colored bodies huddle shackled and blindfolded in a basement corridor of the security police headquarters in Damascus, where the artist was once imprisoned. Now living in Paris, Sulaiman said the single shaft of light that illuminates the scene symbolizes the desperate hope prisoners cling to. ‘Hope of the light after of all this darkness is the thing that keeps you sane. I was not tortured but I saw people getting tortured and I heard their screams. I lost many friends under torture including my best friend, and I can feel their hope of the light even one moment before they died.’” After the terrorist attacks in Paris in 2015, a photo of him and his girlfriend kissing under a sign saying, “Love always wins,” went viral. Francesca Barrie is a translator from French and Italien. She studies at Oxford University and went on to complete an MA in French at University College London. Barrie was shortlisted for the Institut Francis's Young Translator of the Year prize. Her translation of Tiphaine Riviere's Notes on a Thesis, published in 2016, received rave reviews.
Loading...
or
Not Currently Available for Direct Purchase