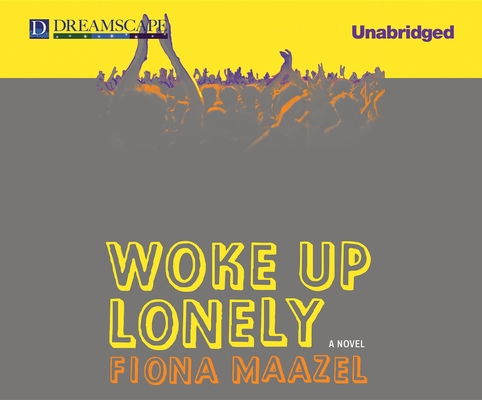 Thurlow Dan is the founder of the Helix, a cult that promises to cure loneliness. With its communes and speed-dating, mixers and confession sessions, the Helix has become a national phenomenon - and attracted the attention of governments worldwide. But Thurlow, camped out in his Cincinnati headquarters, is lonely - for his ex-wife, Esme, and their daughter, whom he hasn't seen in ten years. Esme, for her part, is a covert agent who has spent her life spying on Thurlow, mostly to protect him from the law. Now, with her superiors demanding results, she recruits four misfits to botch a reconnaissance mission in Cincinnati. But when Thurlow takes them hostage, he ignites a siege of the Helix House that will change all their lives forever.

Praise For Woke Up Lonely…

"At turns satiric and heartfelt, Maazel's novel brims with energy and life." - Publishers Weekly
"Maazel manages to strike a number of tones here - from poignant...to paranoid - and she's successful at every level." - Kirkus Reviews
"Woke Up Lonely is the novel equivalent of a sonic boom - it builds, it explodes, it leaves your ears, mind, and soul ringing for days. Who else writes sentences like this, who else writes sound art prose that transports a heart-killing story of human frailty, susceptibility, loyalty, and isolation? No one." - Heidi Julavits, author of The Vanishers
"Maazel is a great novelist and this is a great novel. Great, major, important - say it however you like. This is a book you need." - Darin Strauss, author of Half a Life
"Fiona Maazel's new novel won't take no for an answer - it grabbed me from page one and didn't let me come up for air until the last page; I really think I may have bruised my ribs from laughing." - Karen Russell, author of Swamplandia!
"No one does loneliness, self-abasement, and dread like Fiona Mazel. And maybe no one other than George Saunders illuminates with as much sadness and comic brio the grotesqueness of the extent to which we fall short - as citizens, as family members, and as individuals - of who we imagine ourselves to be." - Jim Shepard, author of You Think That's Bad
"Fiona Maazel's imagination is so wild - wild being an under-observed variety of honesty - that you feel like you've woken up into one of those rare novels as real as life. Hooray for such a talent!" - Rivka Galchen, author of Atmospheric Disturbances
"Ignore Fiona Maazel at your peril. Woke Up Lonely is just as pithy, whimsical, and brilliant as her first novel, Last Last Chance. She writes about loneliness in a way that makes you feel less lonely: a wild, hilarious ride that highlight's Maazel's uncanny knack for avoiding the obvious." - Wesley Stace, author of Charles Jessup, Considered as a Murderer

Fiona Maazel is the author of Last Last Chance, and Woke Up Lonely. She won the Bard Prize for Fiction, and a National Book Foundation ""5 Under 35"" honoree. Her work has appeared in The New York Times, Salon, and elsewhere. She teaches at Brooklyn College, New York University, Columbia, and Princeton, and was appointed the Picador Guest Professor at the University of Leipzig, Germany, for the spring of 2012. She lives in Brooklyn, NY. READER BIOWinner of more than a dozen Audiofile Earphones Awards and a three-time Audie nominee, Bernadette has been honored to narrate the work of Margaret Atwood, Joyce Carol Oates, Shirley Jackson and Anne Rice to name but a few. In the non-fiction category she has recorded the philosophy of Ayn Rand and the autobiographies of Barbara Walters and Katharine Hepburn. Popular favorites include Memoirs of a Geisha, The Devil Wears Prada and the Betty Smith classic, A Tree Grows in Brooklyn. Bernadette studied at The Royal National Theater in London and lives in New York.
Loading...
or
Not Currently Available for Direct Purchase